SRINAGAR, INDIA (AFP) - A 12-year-old boy was among six people killed in three separate gun battles between rebels and security forces in Indian-controlled Kashmir, the police and army said on Friday (March 22).

Clashes have continued to rage in the restive mountainous region since the death of 40 Indian troops in a suicide bombing last month provoked tit-for-tat air strikes between India and Pakistan.

The boy was killed after militants became trapped in his home in the northern town of Hajin and engaged in a two-day gun battle ending on Friday, police told AFP. His father managed to escape.

Two more militants were "eliminated" late on Thursday in the frontier district of Baramulla. One soldier and two policemen were also injured.

Kashmir has been divided between India and Pakistan since the end of British colonial rule in 1947. Both claim it in full and have fought two wars over the territory.

The Feb 14 suicide blast was claimed by a militant group based in Pakistan, and New Delhi has long accused Islamabad of backing a 30-year insurgency that has left tens of thousands of people dead, mostly civilians. 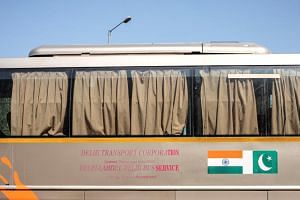 Guns and tourists: Aboard the unlikely India-Pakistan 'friendship bus'

Tactics used by Indian security forces have angered Kashmiris and the death in police custody on Tuesday of a teacher - one of around 1,000 people detained in recent weeks - has further enraged them.

Mr Rizwan Asad Pandit's family have alleged that the young man was tortured, saying his bones and even his spine were broken and that his body bore cuts and clear signs he had been tortured.

An investigation is ongoing, but police have registered a case alleging he attempted to escape from custody.

This has intensified anger across Kashmir, with angry demonstrations, including in the main city of Srinagar, taking place in recent days.