KATHMANDU (REUTERS, AFP) – A Bangladeshi airliner with 71 people on board crashed on Monday (March 12) while coming in to land at the airport in the Nepali capital, Kathmandu, killing at least 50 people, officials said.

The plane, operated by US-Bangla Airlines, was on a flight from Dhaka when it hit an airport fence and burst into flames, said Mr Raj Kumar Chettri, general manager of the hill-ringed airport, which is prone to bird strikes and other hazards.

“We have recovered 50 dead bodies so far,” said army spokesman Gokul Bhandari. Several people had been rescued from the burning wreckage of the Bombardier Q400 series aircraft but nine people were still unaccounted for, he said.

The aircraft burst into flames and came to rest in a field near the tarmac of Tribhuvan International Airport.

Many of the bodies that lay on the tarmac covered by cloth were charred, witnesses said. Thick plumes of smoke could be seen from the aircraft.

Later, photographs showed the fire had been put out, with army personnel and rescue workers at the scene.

Data from tracking website Flightradar24.com showed the aircraft was 17 years old. The aircraft descended to an airport altitude of 4,400 feet and then ascended up to 6,600 feet before crashing about two minutes later, the website said.

There were 67 passengers and four crew on board the US-Bangla Airlines plane from Dhaka. 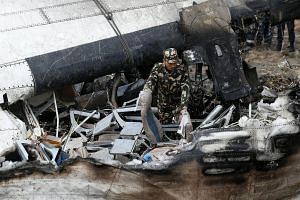 In Pictures: A Bangladeshi passenger aircraft crash in Nepal

Emergency vehicles appeared to be heading into the smoke as people watched from a distance or filmed on their mobile phones.

It said Kathmandu’s airport was closed due to the accident, and inbound flights were either turning back or being diverted elsewhere.

Nepal has suffered a number of air disasters in recent years, dealing a blow to its tourist industry.

In early 2016, a Twin Otter turboprop aircraft slammed into a mountainside in Nepal killing all 23 people on board.

US-Bangla Airlines is a private carrier that launched in July 2014 with the motto “Fly Fast Fly Safe”, according to its website.

The Dhaka-based airline made its first international flight in May 2016 to Kathmandu, and has since expanded with routes to South Asia, the Middle East and South-east Asia.

In 2015, one of its planes overshot the runway on landing at Saidpur in north-west Bangladesh. There were no reports of injuries.