DHAKA (AFP) - Thousands of school students brought parts of the Bangladesh capital to a near-standstill on Wednesday (Aug 1), blockading roads to demand action after two teenagers were killed by a speeding bus.

Home Minister Asaduzzaman Khan appealed to the students to end their protests to avoid a repeat of police baton charges against the blockades late on Tuesday.

Dhaka suffers from daily gridlock but this has been heightened by more than 10 blockades set up across the city since Sunday.

Students mostly aged 13 to 15 have taken to the streets demanding the resignation of a government minister for his comments as well as action to make roads safer.

Authorities say more than 300 vehicles have been vandalised since the protests started. Anger erupted after one of two buses racing for passengers killed a boy and a girl waiting at the roadside on Sunday.

Asaduzzaman Khan on Wednesday promised that the government would launch a public transport safety campaign.

"We request you to withdraw the blockades and return to the classrooms. People are suffering and we don't want this," he said.

More than 3,000 schoolchildren in uniform assembled at the Shahbagh intersection near Dhaka University chanting: "We want justice!" They held placards reading: "Why my brother is buried in a grave while the criminals are roaming free?"

Bangladesh roads are notorious for a lack of safety rules or proper policing. Public transport vehicles are often driven by unskilled or under-age drivers. 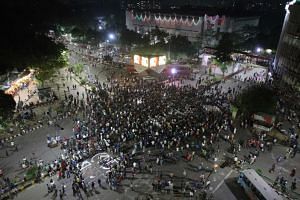 Protests in Bangladesh turn violent as students and police clash

According to the National Committee to Protect Shipping, Roads and Railways, a private research group, more than 4,200 pedestrians were killed in road accidents last year, a 25 per cent increase from 2016.

A remark by Shipping Minister Shajahan Khan stoked the anger when he questioned why there was such an uproar over the two Dhaka children but no reaction when 33 people were killed in an Indian bus crash the day before.

There have been widespread social media demands for his resignation even though the minister later apologised.

Many Dhaka residents had to walk to work in the monsoon rain because of the protests. But many still supported the action.

"The students have done what should have been done by the adults... to raise voices against such anarchy," said banker Rashidur Rahman as he walked to work.