DHAKA (AFP) - Bangladesh is in the grip of the country's worst-ever dengue fever outbreak, officials said on Monday (July 29), with hospitals overflowing and social media flooded with pleas for blood donors.

Eight people have died and there have been 13,637 cases of the disease so far this year, with nearly 1,100 people - most of them children - diagnosed in the last 24 hours, according to official figures.

Local media reported that the number of victims could be much higher and the Amader Shomoy newspaper said at least 30 people had died of dengue this year.

The capital Dhaka is the worst-hit, with the city launching a fumigation drive to kill the Aedes mosquito, which is capable of spreading devastating diseases like dengue, Zika and chikungunya.

Dengue, which causes flu-like symptoms, can be deadly if it develops into a hemorrhagic fever. There is no vaccine or any specific medicine to treat dengue, according to the World Health Organisation.

An AFP correspondent visited major hospitals in Dhaka and saw patients lying on floors and in corridors as they waited for treatment.

"We have opened a special corner for dengue patients," he told AFP. 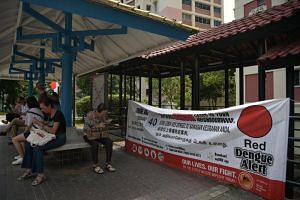 Four more people die of dengue, including a 46-year-old, bringing total deaths to nine this year

Doctors have been working overtime to cope with the large volume of patients.

"Our facilities are overstretched and overwhelmed. We are struggling to cope," a medical officer at Dhaka's Mitford Hospital said.

There have been reports of blood banks struggling to meet the needs of seriously ill patients, with appeals for blood launched on social media sites such as Facebook.

One mother said she was worried about her sick daughter, aged four.

"Doctors have done all they could do. All I am doing now is calling Allah for help," Nasima Khatun told AFP.