DHAKA (DPA, AFP) - Police have charged 16 people over the murder of a teenage girl who was set on fire at an Islamic seminary in eastern Bangladesh last month after accusing the headmaster of sexual assault, police said on Wednesday (May 29).

Ms Nusrat Jahan Rafi, 19, died in hospital on April 10, five days after she was attacked at the Sonagazi Islamia Madrasa. The case sparked a nationwide outcry against sexual abuse and harassment.

She was taken by two classmates to the rooftop of the madrasah where the accused asked her to withdraw the case against headmaster Siraj Ud Doula, according to Mr Banaj Kumar Majumder, the head of the Police Bureau of Investigation (PBI).

When she refused, a group of five people poured kerosene on her and set her on fire, he said, adding that the accused had confessed.

Police submitted the charges against the headmaster and 15 associates to a court in the district of Feni, officer Mohammad Iqbal said, adding that he hoped the court would soon pass an indictment order to begin the trial.

Five of the accused were directly involved in the murder while the others helped them carry out their plan, he said. Investigators were seeking the death penalty for all of them.

At a news conference on Tuesday, Mr Majumder said the headmaster had plotted the killing from jail after he was arrested in late March when Ms Rafi's family filed a sexual harassment complaint against him. 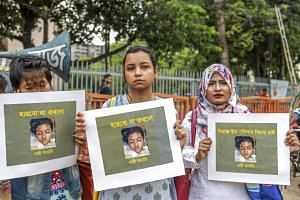 Ms Rafi had gone to police in late March to report the alleged sexual harassment against the teacher, and a leaked video shows the local police station chief registering her complaint but dismissing it as "not a big deal".

Investigator Iqbal said the five accused with direct involvement, including three of Ms Rafi's classmates, had tied her up with a scarf before setting her on fire. The plan was to pass the incident off as a case of suicide.

Ms Rafi suffered burns to 80 per cent of her body.

Her brother, Mr Mahmudul Hasan Noman, said the family want a fast-track trial. "We want all the culprits to be hanged to death," he told Agence France-Presse.

The head of the Mahila Parishad, a women's rights group, gave a "guarded welcome" at the quick investigation of the case, but said more needed to be done to end a "culture of impunity" over sexual harassment and rape cases.

"Very few rape cases end in convictions," she said. According to the group, about 950 women were raped in Bangladesh last year.

The BBC, in a more detailed account of the attack on Ms Rafi, quoted PBI chief Majumder, who on Tuesday described the careful planning - including the purchase of kerosene, burkas and gloves. The accused are alleged to have divided roles among themselves on April 6, the day of the murder.

Some guarded the gates of the madrasah to make sure only students entered, while others kept watch in front of the specific building where Ms Rafi was to be attacked, Mr Majumder said.

According to a statement given by Ms Rafi, she was lured to the roof of that building by a fellow female student. She was allegedly told that one of her friends was being beaten up.

There, Mr Majumder said, she was pressured to withdraw the case and asked to sign a blank piece of paper. When she refused, she was gagged and bound before being doused with kerosene and burned, he said.

In the ambulance, she recorded a statement on her brother's mobile phone and identified some of her attackers as students at the madrasah.

"The teacher touched me, I will fight this crime till my last breath," she can be heard saying in the video.