NEW DELHI (AFP) - At least 11 workers were killed and four others injured after a stock of dynamite caught fire and exploded at a granite quarry in southern India, officials said on Saturday (Aug 4).

Around 16 people were inside the quarry when the blast occurred late on Friday in Andhra Pradesh state.

Police said a fire erupted inside a room that stores dynamite sticks used for blasting holes in the quarry's rock walls.

"After the explosion, the fire engulfed several structures and machines inside the quarry," police officer J. Gopinath told AFP.

Ten bodies were recovered from the site and one died at the hospital, the officer said.

The massive explosion caused cracks in nearby residential buildings.

Police said they have launched an inquiry into the incident. 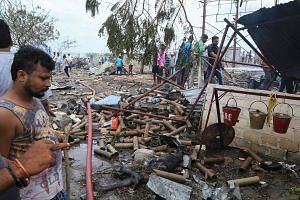 Chief minister Chandrababu Naidu expressed his grief over the deaths and promised cash assistance of 500,000 rupees (S$9,970) for families of the victims.

Workplace accidents are common in India, largely due to poor safety standards and lax enforcement of regulations.

India is among world's five largest natural stone producers and runs hundreds of quarries across the country. Half of global granite exports originate from India.