During the Hindu festival of lights, which is celebrated in India on Nov 7, firecrackers are set off as part of festivities, adding to the pollution.

The Air Quality Index showed that air quality was at the "hazardous'' level in one part of Delhi and at the "unhealthy'' level in other parts of the city on Friday afternoon (Oct 26).

A haze has started engulfing Delhi and its surrounding areas, with Chief Minister Arvind Kejriwal warning that the city would become a "gas chamber soon", as the burning of crop stubble has begun in neighbouring states.

Farmers in Haryana and Punjab burn their crop stubble from the end of October to prepare their fields for the sowing of winter crops.

"The weather conditions are favourable for further deterioration in pollution levels. Unless there are strong winds in the category of at least 20km per hour, this pollution won't go away," said Mr Mahesh Palawat, vice-president of meteorology and climate change at Skymet Weather Services.

"The pollution from Deepavali firecrackers will add to it unless there is rain." 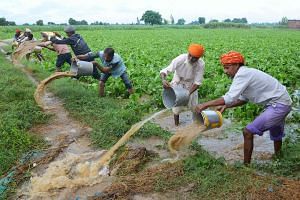 Delhi is one of the world's most polluted cities. This is due to several factors: rapid growth in the number of vehicles, with many middle-class families owning more than one car, preference for cars running on diesel, construction in and around Delhi, and the burning of stubble, apart from open burning of waste.

Pollution also worsens during winter as falling temperatures trap pollutants in the atmosphere.

The environment ministry is implementing a Comprehensive Action Plan (CAP) for the first time to combat air pollution in Delhi and its surrounding areas in the long run. It consists of long-term measures such as stepping up air quality monitoring, as well as tackling emissions from vehicles, power plants, industries and construction works .

Environmentalists said to bring down pollution levels, there must be proper implementation of CAP, coupled with emergency measures such as an ongoing ban on diesel generators.

"A lot of decisions (like BS 6) are being taken for the first time and there is traction. The ultimate solution (for pollution) will come when we are able to implement the Comprehensive Action Plan round the year," said Ms Anumita Roy Chowdhry, executive director of the Centre for Science and Environment.

"Systemic reform will give you the scale of action which can help reduce pollution... Delhi needs to reduce pollution by 74 per cent to meet clean air standards. The challenge is the capability and capacity of the government to do proper enforcement."