KABUL, AFGHANISTAN (NYTIMES) - Afghan security forces and their United States-led international allies have killed more civilians so far this year than the Taleban have because of an increase in air strikes, the United Nations said in a report on Tuesday (July 30), once again raising alarm that ordinary Afghans are bearing the brunt of an increasingly deadly 18-year war.

In the first six months of the year, the conflict killed nearly 1,400 civilians and wounded about 2,400 more.

Afghan forces and their allies caused 52 per cent of the civilian deaths compared with 39 per cent attributable to militants - mostly the Taleban, but also the Islamic State in Iraq and Syria (ISIS).

The higher civilian death toll caused by Afghan and US forces comes from their greater reliance on air strikes, which are particularly deadly for civilians, the report said. The UN said air strikes resulted in 363 civilian deaths and 156 civilian injuries.

"While the number of injured decreased, the number of civilians killed more than doubled in comparison to the first six months of 2018, highlighting the lethal character of this tactic," the UN report said, referring to air strikes.

Colonel Sonny Leggett, a spokesman for the US military, rejected the "methods and findings" of the UN report.

"We assess and investigate all credible allegations of non-combatant casualties in this complex environment, whereas others intentionally target public areas, use civilians as human shields and attempt to hide the truth through lies and propaganda," Col Leggett said.

The Afghan government, in its response to the report, highlighted the casualties caused by the Taleban and then listed the measures its forces take to prevent civilian casualties. 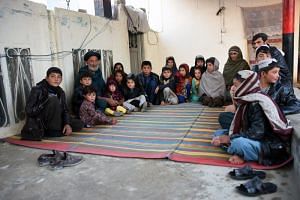 The UN report comes as both sides try to increase their battlefield leverage amid continuing peace negotiations in Doha, Qatar, between the US and the Taleban.

The Afghan government has pointed at deadly Taleban attacks in recent months as a sign that the insurgents are not genuinely seeking peace.

While the UN report showed that both sides are harming civilians, it found that overall civilian casualties had dropped by 27 per cent compared to last year.

The reduction in civilian casualties caused by militants was largely because of a drop in the number of roadside bombs and other improvised explosives, the report said.

The UN report said 83 per cent of casualties from air strikes were attributed to "international military forces", essentially pointing the finger at the US military, which is the only member of the international coalition in Afghanistan that carries out air strikes.

The Afghan Air Force was responsible for about 10 per cent.

Afghan forces have largely fended off the Taleban's advances this year, but with a heavy reliance on US air power.

Fourteen American soldiers have died in Afghanistan this year. The latest fatalities were two paratroopers, part of the 3rd Brigade Combat Team, 82nd Airborne Division, the unit confirmed in a statement.

They were killed on Monday in an insider attack in southern Kandahar province when a man in an Afghan army uniform opened fire, according to Lt Col Mohammad Sadiq, a spokesman for the Afghan army in the province.