NEW DELHI (AFP) - A court convicted five men on Monday (June 6) of the gang rape of a Danish tourist in New Delhi in 2014, a crime which put India's record on sexual violence back in the spotlight.

The five were found guilty of the rape and robbery of the 52-year-old woman, who was attacked at knifepoint after losing her way as she returned to her hotel in central New Delhi.

"I pronounce all the accused guilty. Arguments (on sentencing) to be held on June 9," Additional Sessions Judge Ramesh Kumar told the court in Delhi where media and family members of the accused had gathered. 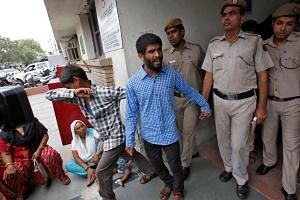 Three others charged over the attack are being tried separately in the juvenile justice system. A ninth accused, an adult, died before the trial ended.

The Danish woman, travelling alone and in Delhi after visiting the Taj Mahal, had approached a group of men for directions as she returned to Delhi's main backpacker area, reports at the time said.

The assault in January 2014 was the latest in a series of sex attacks on foreigners in India which reignited concerns about women's safety in the country.

A Polish woman had been drugged and raped as she travelled to Delhi with her young daughter in a car, just before the attack on the Danish woman.

India's government toughened jail sentences for rapists and overhauled policing procedures in the wake of the 2012 fatal gang rape of a Delhi student on a moving bus.

That attack sparked furious mass street protests about high levels of violence against women, as well as global headlines about the treatment of women in India.

On Monday the five accused, escorted by police into court, showed little emotion when the verdicts were read out.

Neither the victim nor members of her family were in court for the verdict.