NEW DELHI - Officers from the elite Central Bureau of Investigations (CBI) yesterday swarmed over the Brady House branch of state-run Punjab National Bank in Mumbai, the country's financial capital, which is at the heart of a US$1.8 billion ($2.37b) fraud in a case involving a prominent billionaire jeweller.

At least three people, including two junior bank staff, have been arrested so far in connection with the fraud which went undetected for seven years.

The branch was closed yesterday as investigators questioned more staff, conducted searches and pored over records in what a CBI spokesman described as one of the biggest scams being investigated by the agency.

The three people arrested included Gokulnath Shetty, a former deputy bank manager who was working in the foreign exchange department at the Brady House branch and another junior bank official, Manoj Kharat. Mr Shetty retired in May last year.

A source described the third person nabbed, Hemant Bhat, as the "authorised signatory" of the companies tied to jeweller, Nirav Modi.

All three men appeared before a packed courtroom in Mumbai on Saturday afternoon and were remanded into custody until March 3 to allow the CBI to continue investigations. No charges have yet been laid.

PNB has said that the two employees arrested by police colluded with companies belonging to Mr Modi and another jeweller, Mehul Choksi, who heads jewellery retailer, Gitanjali Gems Ltd, and other companies. 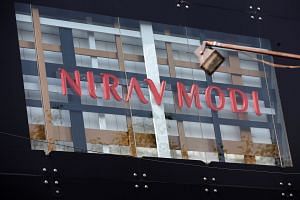 PNB said the two officials issued fraudulent letters of undertaking to overseas branches of other Indian banks which lent money to the jewellers based on a guarantee from PNB.

So far it's not clear how the fraud happened but PNB said in the complaint to the CBI that it was looking into the alleged misuse of the SWIFT interbank messaging system and incomplete ledger entries.

Mr Nirav Modi, who is an Indian national, has not commented on the case and sources said he left the country on January 1, 28 days before investigations began.

His passport has been revoked by Indian authorities and his home and offices raided by different agencies, including the Enforcement Directorate and the CBI.

Mr Choksi, Mr Modi's wife, Ami, an American citizen, and his brother Nishal Modi, a Belgian citizen - who have all been named as allegedly involved in the fraud - also left the country in the first week of January

His jewellery business was branded NIRAV MODI, in capitals, and he has a chain of boutiques stretching from New York to London to Beijing. His jewellery has adorned Hollywood stars like Kate Winslet.

Just last month, he was at the World Economic Forum in Davos and Indian media carried a group photograph of him and other Indian business people posing with Prime Minister Narendra Modi, who is no relation.

Now authorities have yet to establish the whereabouts of the high profile jeweller - who was number 85 on Forbes's 2017 list of India's richest people.

The bank fraud coincides with an effort by the Modi goverment to clean up the banking sector and initiate reforms in the sector.

In December last year the Modi government announced a US$32 billion package for the country's public sector banks which have been hit by mounting non-performing assets or bad loans. The Reserve Bank of India has also been pushing banks to disclose all their bad loans.

Experts said the latest fraud highlighted all that was wrong with India's banking system and the need for reforms.

"Our own assessment is that it is a reflection of process failure in the bank. It is an eye opener for the system and regulator," said Mr Tarun Bhatia, managing director, investigations and disputes, Asia Pacific at risk-management firm Kroll

Questions range from how junior employees in PNB got away with the fraud for years and whether senior management knew what was going on.

"This is a complete failure of all systems from internal control to regulators. Credits were accepted and money lent without cross verification or reconciliation or looking at exposure limits," said Mr Rishi Sahai, managing director of investment bank, Cogence Advisors.

"Many people are clearly involved and all the early signs were ignored."