JAKARTA (BLOOMBERG) - As Indonesia's Joko Widodo bids for a second term, a skills shortage that's leaving tens of millions locked out of higher-paid jobs is weighing on his quest to develop the economy.

It's a stark challenge, according to the nation's investment board chief Tom Lembong, who illustrated its scale by describing a conversation with the local partner to a Chinese company backing a US$5 billion (S$6.92 billion) industrial park in Central Sulawesi.

"The local partner told us they posted jobs for 500 positions," Lembong, a former trade minister, said in an interview. "Nine people signed up."

The spotlight falls on Southeast Asia's biggest economy this week as the world's financial elite gather in Bali for the International Monetary Fund and World Bank annual meetings. While Widodo has made good on his first-term vision of nation building with record spending on infrastructure, inroads into poverty alleviation have only been marginal.

Now, emerging market turmoil and the US-China trade war are adding fresh risks to the outlook. Widodo, known as Jokowi, is vowing to overhaul the nation's labour market amid a long presidential race in which jobs and the economy are set to be the key issues. He has pledged to accelerate infrastructure projects and improve the skills base.

"We must not be trapped in a status of a middle-income country," Jokowi said in August in his annual presidential address to the nation. "We must succeed in becoming a developed country." 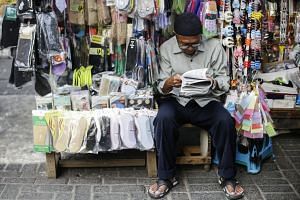 Indonesian economy sound, so no cause for worry: Analysts

The World Bank says Indonesia's economy needs to grow faster than 5 per cent to escape the "middle-income trap", a phenomenon in which countries fail to evolve into high-income nations. Under Jokowi, economic growth has averaged about 5 per cent a year, below the 7 per cent he promised when he took office in 2014.

Indonesia, one of the most resource-rich countries in the world, has a labour force the size of the combined populations of Germany and South Korea.

Only 17 per cent of the 127 million Indonesians with jobs have finished high school, while less than 10 per cent have a university degree. More than half of those working have informal jobs.

The island of Sulawesi had been the world's biggest exporter of nickel ore until 2014, when laws requiring miners to process raw materials locally came into force. While that bent for nationalist policies created jobs, the education system has not kept pace.

The solution to Indonesia's skills problem, according to Lembong, is Chinese capital combined with Australian training. That's a plan that could soon be realised with Indonesia and Australia having concluded talks in August on a free-trade agreement. Part of that deal will see Australian universities given greater access to the Indonesian market.

As for Chinese capital, it's already flowing in, exposing the skills gap as new projects struggle to find the workers they need to succeed.

Bahodopi, a dusty coastal town on the eastern side of the island of Sulawesi where discarded mounds of nickel ore sit on the ground like giant pancakes, is home to the sprawling PT Indonesia Morowali Industrial Park. The region is being transformed by an economic boom that's come on the back of a massive investment in processing operations and smelters.

While Tsingshan Holding Group has pumped billions of dollars into the vast industrial complex, the company and its partners are still struggling to find the skilled workers it needs. Pinned on the jobs board at a labour department building in Morowali, an hour down the road from Bahodopi, are posters seeking engineers and electricians to work in mines and smelters.

There are about 1,000 of those jobs on offer, but Umar Rasyid, the head of the Morowali Manpower office, said he is fighting a losing battle trying to find the right people. And so foreign workers have flowed in to fill the gap: There are some 3,000 Chinese now working at the Bahodopi complex, according to Rasyid.

"The issue now is about foreign workers," he said. "The main social issue is the local workers feel that the foreigners get much higher salary."

Indonesia will go to the polls in April in an election that pits Jokowi against the former Suharto-era general Prabowo Subianto, who he defeated in 2014.

Subianto's Gerindra Party has made it clear that it will mount an aggressive challenge around issues related to the economy, including the labour market and jobs.

Rizaldi, a 20-year-old high school graduate who like many Indonesians goes by just one name, is among voters Jokowi and Prabowo will aim to woo.

Leaning against a wall outside the Morowali Manpower office, he speaks of the nine-hour motorcycle ride he just made with friends from the city of Kendari, hoping to land crew jobs in the mines.

His motivation is simple: "The money is better."

Rizaldi, workers like him and the country as a whole could do much better still if trained. Investment board chief Lembong sees the roll out of vocational training "to upskill people and solve underemployment" as an economic imperative.

"The vast majority of people are stuck in low paying jobs with no clear path to a higher level," he said. "The path is skills and training."