JAKARTA - More smoke from forest fires in Riau province could head towards Singapore and Malaysia in the next  few days due to a change in wind direction, said Indonesia's meteorology, climatology and geophysics agency (BMKG) on Tuesday (Aug 30).

The BMKG, citing latest imagery from the satellite Himawari, said the fires are concentrated in a wide area in the western part of the province in Sumatra island. It added in a statement that as the winds turn and blow eastwards, the smoke will potentially head towards neighbouring Malaysia and Singapore.

The agency said forest fires in the western region of Sumatra is in "a precarious position" particularly over the next five days and it will be keeping a close watch on high-risk areas in Riau, as well as Aceh, Bengkulu and Jambi, among others.

There is also a risk of increase in fires due to weather conditions in Central and West Kalimantan in the next few days.

"We urge people not to burn land and for those people whose territories are affected by air pollution to prepare themselves by using masks," said the BMKG. 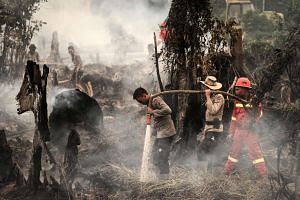 Satellite data from Global Forest Watch (GFW) had detected almost 700 fires across Kalimantan and Sumatra last week, as the thick haze from land burning on the two Indonesian islands began blanketing the skies over Malaysia and Singapore.

However, the 697 fires recorded in Kalimantan and Sumatra from Aug 21 to 28 was a marked improvement when compared with the 5,724 fires detected over a similar eight-day period last year when forest fires raged for more than three months towards the end of 2015. 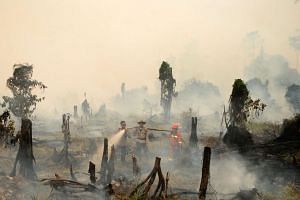 60% of forest fires in Kalimantan, Sumatra not on concession land

Indonesia's National Disaster Management Agency (BNPB) said on Monday that it recorded a 61-per-cent decline in the number of hot spots this year, attributing it to favourable weather conditions, as well as a more cohesive public-private sector approach in preventing and fighting fires.

Dr Sutopo Purwo Nugroho, who heads the BNPB's data and information division, said that the government has sufficient resources to handle the fires and will not need additional assistance as it aims to put out all fires by October this year.

He said this year's haze would not be worse than that of last year when 32,734 hot spots were recorded. In the same period this year, the agency detected only 12,884 hot spots, he added.

While climate change experts do not expect a repeat of last year's record crisis, the haze has started to affect schools in Riau province, where authorities have closed schools on Tuesday for the second day, after the air pollution standard index (PSI) reached "very unhealthy" levels.