In his commentary, the writer says the upcoming elections will see the two candidates vying for the top spot but it might be early to say the results will be the same, as the last election.

JAKARTA (THE JAKARTA POST/ASIA NEWS NETWORK) - The presidential election in April looks like a rematch of the 2014 encounter with the same two candidates bidding for the right to lead Indonesia for the next five years.

Although the race may produce the same results, the dynamics have changed, making this a very different contest.

But Jokowi's victory is not a foregone conclusion.

The chief lesson of the 2016 American presidential race and the Brexit vote in Britain is that surveys can and do get it wrong.

We can throw in the 2017 Jakarta gubernatorial race when then-incumbent Basuki "Ahok" Tjahaja Purnama lost the election despite enjoying a comfortable lead.

In 2014, Jokowi saw his huge lead at the start of the campaign almost wiped out after a vigorous campaign by Prabowo. 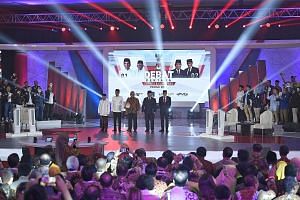 Thailand to delay election yet again to March, say officials

Prabowo has already lost two election bids - in 2009 and 2014 - and he is not likely to concede a third defeat that easily.

A former soldier, he will put up a fierce fight.

This is a different race altogether that requires both candidates to approach it differently.

This is a battle between an incumbent and challenger.

In 2014, both Jokowi and Prabowo entered the race as equals, both offering promises for what they would do if elected.

This time Jokowi will be touting and defending his record.

Incumbency confers advantages as long as he performs well.

Indonesian voters are willing to forgive shortcomings and give a second chance as long as the incumbent shows he has tried.

Susilo Bambang Yudhoyono was reelected with a 60 percent vote in 2009 despite a mediocre performance.

Without a national track record other than the role his Gerindra Party played in the last five years, Prabowo will be attacking and exposing flaws and weaknesses in Jokowi's presidency.

He will find enough materials.

Jokowi comes into the race backed by nine political parties, including the two largest winners in 2014, the Indonesian Democratic Party of Struggle (PDI-P) and Golkar, and two Islamist parties, the United Development Party (PPP) and National Awakening Party (PKB).

Prabowo has a smaller coalition of six parties, including his own Gerindra, Yudhoyono's Democratic Party and two Islamist parties, the Prosperous Justice Party (PKS) and National Mandate Party (PAN).

In 2014, Jokowi only had four parties behind him, and Prabowo had six, including Golkar and the PPP.

Their choice of running mates makes 2019 a vastly different race.

Running mates may have a limited impact on candidates' electability, but in a closely contested race, as in 2014, they can still be decisive.

The choice of Ma'ruf defused earlier concerns that Prabowo would use Islam as a campaign issue, as he did in 2014.

But Sandiaga is proving popular among housewives and, being the youngest of the pack, he appeals more to millennials.

With Islam no longer a major factor in the presidential race, the economy has become the main campaign issue, with Jokowi defending his economic record and Prabowo picking and exposing the shortcomings.

Growth has held steady in the last five years, but the economic performance was not exactly stellar.

Averaging 5 per cent, it falls short of the 7 per cent Jokowi promised in 2014.

He remains vulnerable to attack, particularly on the trade and budge deficits, wealth gap, weak rupiah, joblessness among the educated elite and prices of basic foodstuffs.

Another big difference in 2019 is the simultaneous presidential and legislative elections on April 17.

In the past, the legislative elections preceded the presidential race by three months, giving voters the luxury of voting for one political party, but a presidential candidate from another party.

With the simultaneous elections, voters go to the polling booth with a different mindset.

This affects more the legislative election than the presidential race.

Most surveys show the PDI-P benefits from Jokowi's party membership and Gerindra from Prabowo's leadership.

These two parties are likely contending for the top two slots in the race for the House of Representatives.

Other parties will suffer and Golkar may see itself drop out of the top two slots for the first time.

The Democrats are not too happy with its association with Prabowo and Yudhoyono has let his candidates running for legislative seats endorse Jokowi if it helps them with their campaigns.

Surveys predict many small parties will not reach the 4 per cent of the popular vote they need to have representation in the House.

If only five or six make the threshold, Indonesia will see a major shift in its political landscape.

The idea of holding the elections simultaneously was intended to cut costs, but it appears now to have another unintended consequence: simplifying the multiparty system.

President Jokowi heads a coalition government of seven political parties that has helped him ensure support for his legislative agenda in the House against three in opposition.

The next president, whoever that may be, will likely need to manage a smaller coalition in governing the country.

Simpler, but not necessarily easier.