CHIANG RAI - The head coach of the Moo Pa (Wild Boar) team, which included the 12 footballers who were trapped in a cave in Thailand's Chiang Rai province, told The Straits Times yesterday (Tues) that their rescue meant he would finally be able to sleep peacefully.

Mr Nopparat Khanthavong told ST in a telephone interview: "I'm relieved and I'm happy with the successful rescue mission. For the last few nights, I didn't get restful sleep, but tonight will be the best sleep for me."

He said he has not been able to see the boys and was not at the hospital yesterday evening.

Mr Nopparat said he would visit them, as well as their assistant coach, when he gets approval from the authorities.

"While I was concerned with the rescue, I was confident the boys would pull through because I see their resilience on the field. They're cheerful boys who just love to play football. This experience will definitely make them stronger as a team, both mentally and physically," he said.

He has not had time to watch a full World Cup match, just highlights, because his "time and focus was solely on the team in the cave".

Asked what would be the first thing he would say when he saw the boys and their assistant coach, Mr Nopparat replied : "I don't know what I will say, but I will definitely give each of them a big hug." 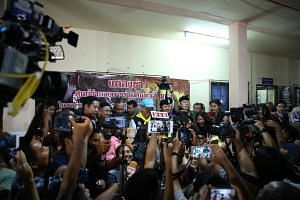 Meanwhile, Thailand's Prime Minister Prayut Chan-o-cha has said that extra precautions would have to be implemented to safeguard tourists who want to visit the cave where the boys and their football coach were trapped for more than two weeks.

"In future, we have to monitor the entrance and exit to the cave. This cave has become world famous. We have to install more lights inside the cave and put up signs," General Prayut was quoted as saying by Reuters yesterday.

"It's a dangerous cave," said Gen Prayut, adding that it would be closed to the public for a while until "everything is in order".

Last week, the Tourism Authority of Thailand (TAT) said it planned to promote the Tham Luang cave as a tourist attraction.