PETALING JAYA (THE STAR/ASIA NEWS NETWORK) - The widow of the late Cradle Fund chief executive officer Nazrin Hassan, two teenage boys and another woman have been charged with his murder.

It is understood that the woman who is still at large is an Indonesian who was working there as a maid.

The charge under Section 302 of the Penal Code carries the mandatory death sentence upon conviction.

The boys were wearing school uniforms while Samirah wore a large blue shawl that covered her head and body.

They nodded their head to indicate that they understood the charge, which was read out by the court interpreter.

No plea was recorded. 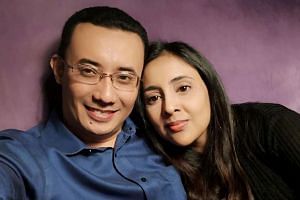 Wife, stepsons of Malaysia Cradle Fund CEO who gave early funding to Grab to be charged with his murder

DPP Jamil Aripin asked the court for a gag order on the media not to publish the names and other details that could expose the identities of the minors in accordance to Section 15 of the Child Act 2001.

"I ask the court not to allow photographs of the children to be transmitted in electronic media as well," he said.

Mr Jamil also applied for the court to transfer the case to the High Court.

Magistrate Mohamad Ikhwan Mohd Nasir issued the gag order and ordered for the case to be transferred immediately to the High Court.

Lawyers L.S. Leonard and Mahinderjit Singh appeared for the accused.

No dates have been fixed for mention.

In a press statement earlier, the police said Samirah and the two teenage boys were detained at their home at about 6.45am on Monday morning.

Cradle is a Finance Ministry company that looks into developing entrepreneurs and the Malaysian start-up ecosystem. It was the agency that gave early funding to companies like ride-hailing pioneer Grab (previously MyTeksi) and fintech start-up iMoney.

Mr Nazrin had a young son with Samirah, three stepsons and a son from a previous marriage.