Further, it ranks first in the world for enrollment of women in higher education with 1.41 women attending a university for every man.

Done guessing? It is Thailand, where women score well in nearly all measures of leadership in the corporate sphere, far surpassing most other Asian countries and gaining good marks globally.

Yet even as women are making significant progress in Thailand's business world, there is a stark contrast in politics, where they are being left behind. Thailand ranks near the bottom - 181 of 193 countries - in the Women in Parliament list for 2017 by UN Women.

Currently, only 13 women are part of the junta's 240-seat parliament. There is not a single woman Cabinet minister.

The general election set for next month will highlight the lack of progress for women in politics compared with the corporate world. Of 68 aspirants for prime minister from 44 parties, eight are women.

Women leaders in real estate, transportation, retail and manufacturing say one of the most important reasons for Thailand's success in empowering women in corporations is a culture of working women via family businesses - women have always worked "outside the home" in Thailand. And women have had access to education, another key factor.

"In the past, men would be conscripted to work outside of home, so women would be in charge of running the household and trading products in the market. It's the role that ingrained in the sexes," said Ms Juree Vichit-Vadakan, former president of the National Institute of Development Administration, who is at the forefront of women's studies in Thailand.

Thai women's involvement in family is different from other countries like South Korea and Japan, where women still run the household and hold few corporate jobs.

Women leaders have more opportunities to run corporate Thailand because the culture allows them to work alongside men in such fields as finance and insurance, while women in politics typically need the support of political parties to break into that male-dominated sphere. For instance, females make up only about 5 per cent of the military-appointed legislature - a place where women need backing to get ahead.

Ms Kamonwan Wipulakorn, 56, illustrates the ability of women in Thailand to lead companies after working their way up slowly. She started "at the bottom" of a brokerage firm. Yet in an unusual winding trajectory over three decades, she rose through the ranks, switched industries and is now leading a major real estate company as chief executive officer.

Ms Kamonwan is now CEO of One Origin, a subsidiary of one of Thailand's largest real estate developers Origin Property Pcl. She started her career in the financial industry as an analyst, leaving after 15 years as a vice president because she wanted to try something else.

She joined a petrochemical company for five years as chief financial officer, and then left for a similar role at Erawan Group Pcl, where she became president within three years.

"Maybe I'm lucky but I've never been in a situation that I felt there's a limitation because I'm a woman. I've never felt like they would choose a male executive over me," Ms Kamonwan said.

Ms Kamonwan's story echoes through corporate Thailand, Southeast Asia's second-largest economy. Thai women are the driving force behind businesses across many industries and they make up more than one third of senior management positions.

While Ms Kamonwan has worked her way through the corporate world, many women leaders in Thailand inherited family businesses, which is one of the key reasons for the high percentage of women leading companies in the country.

"This is the country of opportunities for women. Opportunities are here if we want to take them, so we see local businesses started and run by women," said Ms Supapan Pichaironarongsongkram, CEO of Chao Phraya Express Boat, a company that was started by her grandmother about a century ago. Ms Supapan, 74, represents the third generation of women who have run the family business.

Ms Supapan took complete control of the company after her mother died, saying she feels it is her "duty" to oversee the business to which her grandmother and mother had devoted their lives, and that running the low-margin ferry company is a "public service". 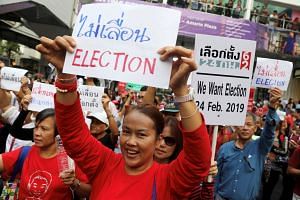 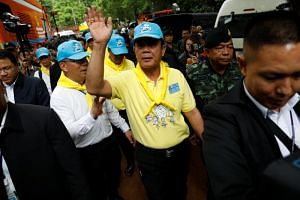 She developed the small river ferry company in Bangkok into a conglomerate that serves 17 million boat passengers annually, sells advertising space on boats and operates piers, malls, hotels and restaurants. Her daughter is next in line to run the company.

Another woman who inherited a family empire is Ms Chadatip Chutrakul, 57, CEO of Siam Piwat Co, a mall operator founded by her late father. Yet Ms Chadatip did not start at the top, instead her father required her to work in every position at the company, including in mall security and at the information desk.

"It wasn't easy but I learned from everybody," she said, adding that her father groomed her to take over the company though she worked in insurance companies early in her career. She said her brothers "successfully escaped" working for the family business.

Under Ms Chadatip's leadership, the company expanded its portfolio of malls and recently opened a gleaming US$1.7 billion (S$2.3 billion) riverside complex, a cornerstone of Bangkok's efforts to develop that part of the city.

Another factor behind women's corporate success in Thailand is that they stay in the workforce even after having children, unlike in other countries where workforce participation typically drops.

The Thai family structure has grandparents often living in the same household, or involves help from other family members or domestic workers, allowing more Thai women to remain in the labour force, said Ms Anna-Karin Jatfors, UN Women regional director for Asia and the Pacific.

"For women who come from certain socioeconomic groups, they have been able to balance the family and career obligations and aspirations with these support networks," Ms Jatfors said.

On the political front, matters are not nearly as rosy. According to Ms Juree, things are different for women in politics from business because of the party structure. National politics is historically a male domain, unlike businesses where women have participated from the start.

Ms Kobkarn Wattanavrangkul, who has returned to Toshiba Thailand Co, was the first woman tourism minister and at the time was one of three women Cabinet members in the male-dominated government.

She said the main difference between the world of business and politics in Thailand is the lack of support for women, though she would like to see more women take charge in the business world as well.

"From my experience, I see that women run businesses and their households, but sometimes we let men speak on our behalf at meetings," 58 year-old Kobkarn said.

Similar to Ms Kobkarn, Ms Juree was once in government, as a member of the national legislative assembly.

"Parliament is a very lonely place for women," said Ms Juree, who was also was part of the constitutional drafting committee.

"It's easier for men to form a coalition," she said.