KUALA LUMPUR - The diplomatic row between the environment ministers of Malaysia and Indonesia has elicited mixed reactions from netizens of both countries as to who is at fault for current hazy conditions.

As more Malaysians head to pharmacies to stock up on N95 face masks to filter out dust while the air pollution index climbs, tensions between government officials have also escalated with back and forth arguments.

Malaysia's energy, science technology, environment and climate change minister Yeo Bee Yin, citing data from the Asean Specialised Meteorological Centre (ASMC), has pointed to the haze in the country as having originated from Indonesia's Kalimantan and Sumatra islands, where more than 1,600 hot spots were detected on Thursday.

According to ASMC, most of the fires are located in peatlands - indicating that such fires were occurring on agricultural land.

According to Kompas, Ms Siti Nurbaya said: "The smog that entered Malaysia, to Kuala Lumpur, is from Sarawak that spread to Peninsula Malaysia and perhaps some was from West Kalimantan.'' She added that Ms Yeo's explanation should have been more objective.

Angered by the annual haze, netizens in Malaysia lauded Ms Yeo's swift remarks on Facebook to debunk Indonesia's environment minister, posting that the data spoke for itself and "Minister Siti Nurbaya should not be in denial".

On Facebook, Ms Yeo's account was filled with mostly positive comments. One user, Eskay Tan, wrote: "Our Minister got all the facts. Not shooting off the hip."

But while many praised Ms Yeo for sticking to data, many others also called for immediate action to tackle the root causes of haze and to provide solutions to ease air conditions. 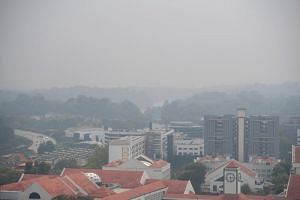 Schools in Peninsular Malaysia closed due to haze, King expresses concern over smog

Haze in region gets worse as hot spots rise

"It's a no-brainer on the source ever since it became an annual occurrence a decade ago. A more relevant question now is what are we going to do about it?" Facebook user Phui San posted in the comments section.

Indonesia is the world's highest producer of palm oil, with plantations located in Kalimantan and Sumatra accounting for 96 per cent of the country's palm oil production. The persistent hot spots reported by ASMC correlate with regions known for palm plantations.

Not everyone was angered and serious on social media, with some netizens poking fun at Minister Siti Nurbaya's comments.

Minister Siti Nurbaya also faced a mix of support and ridicule back home.

Some, like Facebook user Dwi, backed the minister's claim that haze from Malaysia came from the country's own forest fires.

"They are turning a blind eye to what's happening in their own forests. Indonesia is an easy target. Yes, we have hot spots, but that doesn't mean we should be the only one blamed," she wrote.

But Ms Siti Nurbaya's comments did not go down well with others, who called her an "embarrassment".

But perhaps the best solution to this ongoing debacle was summed up by Facebook user Judy Lam.

"Perhaps the annual fires will stop when the Indonesian capital is moved to Kalimantan."