BANGKOK (REUTERS) - Thailand's defence minister on Monday (Aug 28) said he did not know the whereabouts of former prime minister Yingluck Shinawatra, days after she failed to show up for a verdict in her trial for negligence at which she faced up to 10 years in prison.

Yingluck, whose government was ousted in a 2014 coup, fled to Dubai via Singapore, sources in her Puea Thai Party said on the weekend.

Her departure leaves the populist movement that has dominated Thai politics for more than a decade leaderless.

Her brother, former prime minister Thaksin Shinawatra, who was ousted by the military in 2006 and also fled Thailand to avoid a 2008 jail sentence for corruption, has a home in Dubai.

"We don't know where Yingluck fled and whether she has asked for asylum anywhere," Defence Minister Prawit Wongsuwan, who is also a deputy prime minister, told reporters. "We haven't asked for her extradition yet." 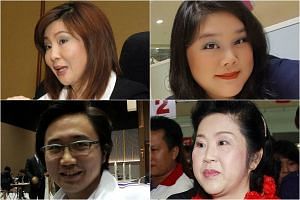 Politics runs in the Shinawatra family

Yingluck was often followed by plain-clothes police, her aides said. During a provincial tour last year men in military uniform would often follow her as she greeted supporters.

Critics are now asking how a person under close scrutiny by security forces could leave the country without being noticed.

"How should I know?" was Prawit's response to reporters who asked him that on Monday.

An arrest warrant has been issued for Yingluck, 50, who had been due to appear at the Supreme Court on Friday (Aug 25) to hear a verdict in a case against her, involving a rice buying scheme introduced by her government that lost an estimated US$8 billion (S$10.8 billion).

A former commerce minister in her government was jailed for 42 years on Friday for falsifying government-to-government rice deals in connection with the same subsidy scheme.

Reuters could not reach either Thaksin or Yingluck for comment on Monday.

Yingluck, who is usually active on social media, has not posted on her Facebook page since Thursday, when she told supporters she would see them at the court.

Defence ministry spokesman Kongcheep Tanatravanich told reporters he was confident Yingluck was no longer in Thailand.

"We have to see first which country she's in. The security side is working on this," Kongcheep said.

Srisuwan Janya, secretary-general of the Association to Protect the Thai Constitution political group, said he would file a complaint on Monday with the National Anti Corruption Commission over what he called government officials' failure to prevent Yingluck from fleeing.

By mid-morning on Monday Janya had yet filed the complaint.

Sentencing in Yingluck's case has been moved to Sept 27 and is expected to be delivered in absentia.