In its editorial, the paper says Mekong dams feed the region's hunger for energy, but satisfying that appetite need not come at a cost to human lives

BANGKOK (THE NATION/ASIA NEWS NETWORK) - The terrifying warning went out 24 hours earlier, but by the time it reached thousands who live in Laos' southern Attapeu province, it was already too late.

The dam that collapsed on Monday unleashed a tsunami that washed away whole villages of homes and people.

Dozens were killed in the disaster and hundreds are still unaccounted for.

The South Korean partner in the hydropower project, SK Engineering & Construction, issued a statement saying their engineers had struggled for almost 24 hours to try and prevent the breach.

But one of the five saddle dams designed to confine the reservoir directly behind the main Xepian-Xe Nam Noy Dam failed after heavy rains, flooding villages in the southeast and leaving an estimated 6,600 people homeless. 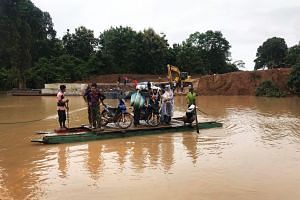 The sheer scale of devastation emerged with pictures of people being evacuated from the flooded landscape and others marooned on their rooftops.

Shock and despair was etched in the faces of many of the victims.

The disaster is also a huge blow to Laos' ambition to turn its landlocked country into "the battery" of Southeast Asia and China.

The development goal of tapping its natural resources for energy to sell to neighbouring countries comes at a cost.

Tragically, hundreds in Attapeu have paid the ultimate price.

Pianporn Deetes of the conservation group International Rivers said there were major risks from dams not designed to cope with severe weather conditions such as very heavy rain.

Unpredictable extreme weather events are becoming more frequent in the region due to climate change, she said.

"This disaster also shows the inadequacy of warning systems for the dam construction and operations," said Pianporn, who has long monitored dams in the Mekong River basin.

"The warning appears to have to come very late and was ineffective in giving people advance notice to ensure their families' safety."

As a major customer for the energy produced by Lao dams, Thailand and its people have a moral obligation to help our neighbour through this crisis.

We can start with what's needed most urgently.

Authorities in Attapeu have asked for emergency aid for the victims, including clothing, food, drinking water and medicine.

Soulichanh Phonkeo, the Attapeu Planning and Investment Department director, told the Vientiane Times that many victims had been washed away in the torrent, but others had managed to cling on to tree branches and were waiting to be rescued.

"We need a large number of boats to rescue them from the danger area," he said.

For the wider region, this is a moment of truth for the disaster management of the Asean Coordinating Centre for Humanitarian Assistance (AHA).

The AHA Centre describes itself as an "inter-governmental organisation which aims to facilitate cooperation and coordination among the Asean member states and with the United Nations and international organisations for disaster management and emergency response in Asean region."

Now is the time to match these words with deeds and use this tragedy as a learning curve to shape our collective response to future disasters in the region.

The energy-hungry countries of Southeast Asia must take responsibility for the local dangers posed by the vast infrastructure projects that feed their needs.

With so many dams being built in Laos and upstream in China, Mekong development can provide plenty of valuable lessons, in addition to the power that helps push our economies and light our houses.

The Nation is a member of The Straits Times media partner Asia News Network, an alliance of 23 news media entities.