JAKARTA (THE JAKARTA POST/ASIA NEWS NETWORK) - On Mar 24, Thai voters will go to the polls to elect their MPs, who will then elect a prime minister.

On April 17, Indonesians will also exercise their constitutional right to directly elect their president and vice president, as well as members of the House of Representatives, the Regional Representatives Council and various local councils.

Indonesian voters are more fortunate than their Thai counterparts.

After the dissolution of the pro-Thaksin Shinawatra Thai Raksa Chart Party, it is almost certain that the pro-military Palang Pracharat Party will win the election.

Premier Prayut Chan-o-cha, who led the military coup against a democratically elected government in 2014, looks certain to stay on in power as Palang Pracharat's nominee for prime minister.

So, is it a real general election?

For three decades until 1998 Indonesia lived under a military regime. 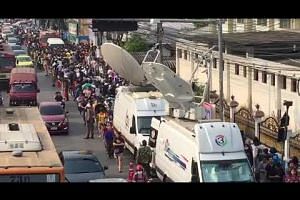 Now, Indonesia is the third-largest democracy in the world after India and the United States.

Some credit for that remarkable progress must go to the Indonesian military, who returned to barracks for the sake of restoring civilian supremacy.

There have been efforts to lure the military back to government, but we believe our soldiers will stick to their commitment, in the knowledge that citizens will not permit them to betray their oath.

The Thai military could learn much from Indonesia's journey to democratic rule.

It will not be easy; but in a globalised era Thailand's generals have no choice but to adapt to global norms.

Thailand is a great nation, which has never endured the pain and bitterness of colonial rule.

King Bhumibol Adulyadej guided the Kingdom to a high level of development during his 70-year reign until his death in October 2016.

There were frequent military coups during his tenure, but the people obediently followed their King, on whom the survival of any junta totally depended.

The world may have different opinions of Thai military rule during that time, but Thais accepted the situation because they knew they were safe under the King's protection.

After his death, the crown passed to King Maha Vajiralongkorn.

Times have changed and the new King is facing different challenges.

Thailand has won admiration in the region especially for its economic development.

Its ability to reap huge revenues from agribusiness and tourism and to attract foreign investment for decades has amazed its neighbours.

Indonesia, for its part, has won plaudits around the world for its democratisation.

On June 7, 1999, Indonesia sprang a surprise by demonstrating its democratic maturity in holding a free, fair and peaceful general election.

The nation proved the international media wrong in their perception of ordinary, uneducated Indonesians as being unready for democracy.

It took Indonesia little more than a year, from the day the dictator Suharto stepped down in May 1998, to organise an international-standard election.

In 2004, for the first time since independence in 1945, Indonesia directly elected its president and vice president.

Our electoral system is simpler than that of the US and more democratic than that in many developed countries, including Australia.

The Indonesian military was still represented in the House and the MPR until 2004, but by so few in number that it could not play a significant role - unlike during the New Order regime.

Soldiers have still not withdrawn entirely from Indonesian politics, however.

Earlier this month, academic and rights activist Robertus Robert was arrested and charged with insulting the military for singing words chanted by anti-Suharto demonstrators in 1998 to mock the abusive behaviour of soldiers.

Addressing parents and relatives of victims of military violence outside the Presidential Palace, Robertus lambasted the government's plan to give civilian posts to active members of the military.

Critics have criticised the plan as a gateway to reinstating the military's power.

President Joko "Jokowi" Widodo has backed the move, which he says will tackle the oversupply of colonels and generals.

His government has dismissed fears that the military will return to power. Public opinion is sharply divided over Robertus's attack on the military, but his warning has prompted the generals to reiterate their promise not to leave barracks and claw their way back into power.

As for Thailand, the situation has been complicated by a junta that has morphed into a political party. This will blur the line between military and civilian rule after next week's election, when a junta-appointed Senate will further cement military influence.

As such, Thailand's latest bid to deliver democratic rule, promised to its people by the country's 1932 revolution, is off to a shaky start.

For guidance on the journey ahead, it could do worse than look to Indonesia.

The writer is Managing Editor of The Jakarta Post. The paper is a member of The Straits Times media partner Asia News Network, an alliance of 23 news media organisations.