JAKARTA (THE JAKARTA POST/ASIA NEWS NETWORK) - Jakarta has some of the world's most polluted rivers and one picture that went viral recently may explain in a nutshell why the Big Durian's attempt to clean its rivers seems like a Sisyphean task.

The picture shows a man caught casually dumping a bucket of household trash into the river while a river cleaning officer was on duty nearby. Standing in ankle-deep water, the officer watches the man empty his dustbin.

The incident took place at Kali Krukut River in Kebon Dalam, Tanah Abang, Central Jakarta, on Wednesday (Jan 30). The next day, the man, identified as Mukhlicin, was fined 300,000 rupiah (S$29) for violating Bylaw No. 3/2013 on waste management.

Mukhlicin's act was caught on camera and posted by the Jakarta Water Body Management Unit on its official Instagram account @upkbadanairdlhdki. The post attracted more than 700 comments, most of which condemned the man's act.

"This is an example of something that should never happen in any part of the Earth. In an ironic act, a man intentionally threw a bucket of trash into a river when a Water Body Management Unit officer was on duty," the photo's caption reads.

Many Indonesians still use rivers as a waste dumping area, Mr Wicaksono Sarosa of Partnership for Governance Reform told The Jakarta Post on Friday (Feb 1).

"We need greater public education on this," he said.

He argued that disposing waste into the rivers was a cultural issue that went beyond Jakarta.

"This is not only happening in Jakarta. The river is still considered a 'back area'. It's a general attitude of urban communities in Indonesia."

He said that local administrations should both enforce the law and raise public awareness on the need to keep the rivers clean.

"This incident should serve as a reminder that the regulation has never been enforced... as both the enforcers and the public don't take it seriously." 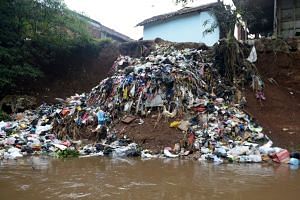 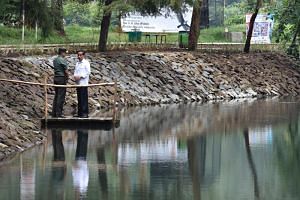 Jakarta's rivers are notoriously dirty, receiving an estimated 2.5 million cu m of wastewater per day. More than 70 per cent of the wastewater comes from millions of households and the remaining comes from commercial buildings and industrial activities.

Household wastewater comprises the population's "gray water" or detergent water, other kinds of household wastewater and "black water", which is wastewater from faeces. The National Development Planning Board (Bappenas) reported in February 2018 that 96 per cent of river water in the city is severely polluted. The rivers are contaminated with high levels of biochemical oxygen demand, phosphor and nitrogen.

During the Asian Games last year, Jakarta decided to cover up a river - so polluted it is nicknamed kali item (black river) - with a giant black nylon net amid concerns it would be an eyesore and too smelly for foreign athletes.

The government has long planned to develop the Jakarta Sewerage System (JSS) to process household waste at an integrated wastewater treatment plant (IPAL) before the water is pumped into rivers.

The system is expected to reduce pollution in Jakarta's 13 rivers, provide clean water and stop residents from pumping groundwater, an activity that has resulted in land subsidence.

However, development of the JSS, which was scheduled to kick off last year, has been postponed to 2019 for various reasons.