JAKARTA (THE JAKARTA POST/ASIA NEWS NETWORK) - While supporters of President Joko "Jokowi" Widodo and presidential hopeful Prabowo Subianto have been trading increasingly vindictive blows online, the results of the latest survey show that personal attacks against candidates have little effect on voters' opinions of their preferred candidates.

The survey from Jakarta-based pollster Indikator Politik Indonesia, which polled 1,220 people across 34 provinces between Dec 16 and 26, found that candidate support is the largest determining factor in whether respondents give credibility to such attacks.

The respondents were asked whether they were aware of four widely spread rumors regarding the candidates: that Mr Joko's parents are Christian, that Mr Joko is of Chinese ethnicity, that the now-defunct Indonesian Communist Party (PKI) is resurgent, and that Mr Prabowo was involved in the kidnapping of pro-democracy activists between 1997 and 1998.

While the first three issues are unsubstantiated, military documents leaked in 2014 showed that that the Indonesian Military (TNI) Officers Ethics Council did discharge Mr Prabowo because of his involvement in the forced disappearances. 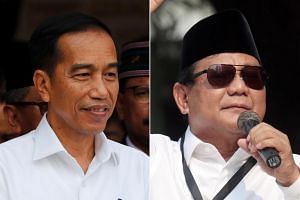 Jokowi's challenger trails far behind him in social media popularity

The battles to come for Jokowi

Similarly, 65 per cent of Joko supporters believed that Mr Prabowo was involved in the activist kidnappings, while 63 per cent of Prabowo supporters did not believe this.

"This leads to the conclusion that Jokowi and Prabowo supporters are living in different worlds," Indikator's Burhanuddin Muhtadi said on Tuesday (Jan 8).

Observer Kuskridho Ambardi said that most supporters only sought out and believed information that was in line with their preconceived political views.

"All this time, political elites keep thinking about the effect of the media, and they imagine voters as a passive audience that can be bombarded with messages and moulded in that way," he said. "That's not what's happening."

He cited his experience in participating in WhatsApp groups that were dominated by Joko and Prabowo supporters, respectively.

"While we might imagine that WhatsApp groups and the Internet would open more space for public discussion and dialogue, I think that is incorrect. What occurs are monologues, not a dialogue."

He added that the role of political parties would also be key in determining election winners, saying: "Since these are simultaneous elections, the function of parties is very important, not just the 'air power' through social and other media but the 'territorial power'."

Prabowo campaign team deputy chairman Mardani Ali Sera, meanwhile, said that Mr Prabowo would look to use the upcoming debates "to reach out to as many (voters) as possible and let them assess and decide".

Mr Kuskridho said the best strategy for both candidates would be to target as many smaller groups as possible rather than trying to convert large groups.

"I don't think that social media is able to move any large group of people from one camp to the other."