BANGKOK - Millions of Thais braved long queues and blistering heat on Sunday (March 24) to vote in a much-anticipated general election - the country's first in eight years which pits the military-backed government against veteran opposition parties.

Eighty political parties are vying for the 500 seats in the House of Representatives, which comprises 350 elected from constituencies and another 150 from a party-list system.

From 8am to 5pm (9am to 6pm Singapore time), around 51 million voters will cast a single ballot for their preferred constituency candidates. This same ballot would be used to determine a separate list of allocated seats to each party.

At a car service centre which has been turned into a polling station at Bangkok's Huay Kwang district, voters began trickling in 30 minutes before polling opened.

Household goods shop-owner Prapai Kunwitpaisarn, 63, the first to arrive, told The Straits Times that she will be voting for a government that will improve the economy and maintain peace and order.

"I feel very excited because we haven't had an election for many years. I hope more investors will come and do business with our country and everyone will have jobs," she said.

"I have one party in my heart for a long time," she added. 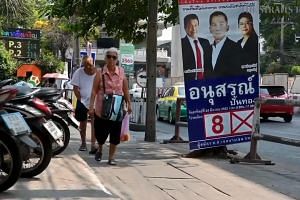 Sunday's poll broadly set parties allied with Prime Minister Prayut Chan-o-cha against parties linked to former prime minister Thaksin Shinawatra and his sister Yingluck, who is also a former premier. The siblings are now in self-exile after their governments were toppled.

Under a new 2017 Constitution, which critics say is designed to keep pro-military forces in power, there are 750 members of Parliament.

They comprise 500 elected members of Parliament and 250 senators largely appointed by the junta. Together, they will vote for a prime minister after Sunday's poll.

Parties wanting to form a government need to secure 376 seats.

The main opposition Pheu Thai party and its previous iterations have won every election since 2001, and is again tipped to win the most seats in the lower house this time round, but not enough to form a government, observers noted.

"The sheer number of political parties contesting, as well as mixed results from the latest election surveys, suggests that a fragmented lower house will be formed by the end of the voting," OCBC Bank's economist Howie Lee said.

A palace announcement on the eve of the landmark election - and again four minutes before polling opened - urged voters to cast their ballots with care. Issued on behalf of King Maha Vajiralongkorn, it referred to a 1969 statement made by his father, the late King Bhumibol Adulyadej, to help "good people" rule and to control "bad people" so that they do not have the power to create chaos.

Voter interest is high in this election. The Election Commission estimates that voter turnout could hit as high as 80 per cent.

Turnout for advance voting last Sunday was around 87 per cent of 2.6 million people registered, with the figure exceeding 90 per cent in some areas.

Several irregularities were reported then, including ballot papers given out for the wrong constituencies, but the Commission has assured that the problems would be reviewed and resolved before today's poll.