MANILA (BLOOMBERG) - Citizens in the southern Philippines will vote on Monday (Jan 21) on a proposal to give the region greater autonomy, a move the central government says will help end decades of violent conflict.

More than 2.8 million residents of the Autonomous Region of Muslim Mindanao are expected to vote on a law creating an expanded region called Bangsamoro, which provides more funding, a bigger revenue share and full control of its resources. Another round of voting will be held on Feb 6. Some local politicians are opposing the move, refusing to cede control of their areas to a new political entity that will control the region.

The vote is the culmination of two decades of talks aimed at ending four decades of insurgency that has killed tens of thousands of people and stifled the development of the Philippines' second-biggest island that has mineral deposits worth an estimated US$300 billion (S$407.6 billion).

"The approval of this law will signal peace, and hopefully, the Bangsamoro can hitch on the coming Mindanao boom in investments," the head of the region's investment board, Mr Ishak Mastura, said by phone. The region is targeting more than two billion pesos (S$51.6 million) in investments to come in this year following the autonomy vote, he said. 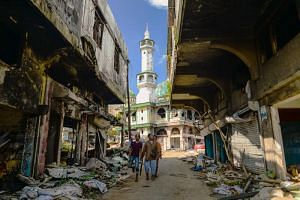 President Rodrigo Duterte has campaigned for the new region, saying it will help him deliver on his election pledge to bring peace and wealth in the southern Mindanao island. The region is located on Mr Duterte's home island, and last Friday in the southern city of Cotabato, he pledged to amend economic provisions in the Constitution once the vote had passed.

"Your approval of this law will not only serve as an expression of your desire to end more than half a century of armed struggle in the region," Mr Duterte said. "It will also serve as a testament to your determination to bring genuine peace and development in Muslim Mindanao."

There will still be challenges for investment even if the plebiscite favours autonomy, Mr Mastura said, including poor infrastructure and high power costs. The region has the highest poverty rate in the Philippines, with more than half of its population considered poor, based on a government survey in 2015.

Despite its problems, the autonomous Muslim region has shown some promise. Its economy grew a record 7.3 per cent in 2017, becoming the fifth-fastest growing region and beating national economic growth of 6.7 per cent. Among the multinational companies that have factories, operations or plants in Mindanao are Dole Food, Nestle and LaFargeHolcim.

Mineral deposits are valued at more than US$300 billion or about 40 per cent of the nation's total mineral reserves, according to government estimates. Still, its economy remains highly agricultural, and contributes only 1 per cent to the country's total output.

"If I were an investor, I would watch out for this region," former peace adviser Teresita Deles said. "It has so much economic potential, and its development will help boost our economy further."