LANGKAWI (THE STAR/ASIA NEWS NETWORK) - A total of 88 passengers trapped in gondolas after the Langkawi SkyCab experienced a technical fault were successfully rescued by the Fire and Rescue Department on Sunday (Feb 18) night.

Fire and Rescue Department personnel along with Langkawi SkyCab staff managed to manually operate the gondolas to bring the passengers down.

“We are repairing the cable car at the middle station. Once we are done, we will rescue the other victims who are still stuck on the mountain.

“The problem is due to a faulty bearing,” he said. When contacted at 10.45pm, he said the repairs would be done within 20 minutes.

Mohd Fadzlullah estimated that some 300 people were still stuck up Mount Machinchang.

He added that those stranded at the stations would be brought down in stages. 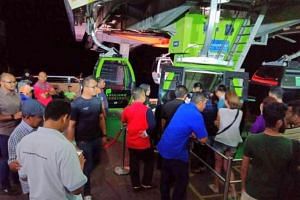 “As soon as we arrived on the scene at 7.06pm, the team assisted the Langkawi SkyCab staff in carrying spare parts up to the first station,” he said.

Mount Machinchang is home to the famous cable car that carries passengers up 708m above sea level to the peak.