Terms & conditions apply
Frequently asked questions
JAKARTA - A Vietnamese coast guard vessel on Sunday (May 21) reportedly intercepted an Indonesian maritime security patrol that was escorting five fishing boats caught poaching earlier.
Indonesia's Ministry of Marine Affairs and Fisheries said on Tuesday (May 23) that the Vietnamese fishing boats were stopped in Indonesian waters near the Natuna Islands, in the South China Sea. Vietnam, however, claims its fishermen were in its own waters during the incident.
But the clash on Sunday not only led to the Indonesian authorities losing custody of all five Vietnam-flagged fishing boats, it had detained earlier, but it also resulted in one of its own officers being held by the Vietnamese coast guard.
This comes just days after President Joko Widodo was in the Natunas to witness a major militrary exercise that involved more than 5,000 armed forces personnel on May 19.
It was also reminiscent of a similar confrontation in March last year, when a Chinese coast guard vessel intervened in the same way and freed the Chinese fishing boat, KM Kway Fey, after it was held by an Indonesian patrol. Jakarta later summoned the Chinese envoy to explain its coast guard's actions. 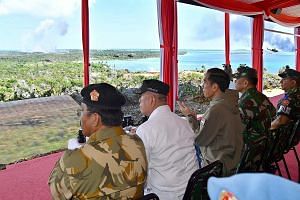 Indonesia and Vietnam, however, will resolve the matter amicably through diplomatic channels, said Maritime Affairs and Fisheries Ministry secretary-general Rifky Effendi Hardjianto at a press conference in Jakarta on Tuesday.
The Indonesian official added that he had met with Vietnamese Ambassador to Indonesia Hoang Anh Tuan earlier on Tuesday to address the matter and agreed that they "will not fight at sea".
The five fishing boats were stopped by the Indonesian patrol on Sunday between 10am and 11.20am local time, after they were spotted poaching in Indonesia's Exclusive Economic Zone (EEZ) just off the Natunas in Riau Islands province, said Mr Rifky.
An EEZ is a zone extending 200 nautical miles from shore over which a state has special rights regarding the exploration and use of marine resources under the United Nations Convention on the Law of the Sea.
As the poachers were being escorted to land for processing by officers from the Maritime and Fisheries Resources Monitoring Directorate-General, a Vietnamese coast guard vessels showed up to obstruct their path at sea. It would later be joined by three more Vietnamese coast guard vessels, he added.
According to the Indonesian patrol craft's log, seen by The Straits Times, one of the Vietnamese coast guard vessels suddenly rammed against one of the fishing boats at about 1.10pm and it sank.
In the process, the Vietnamese took an Indonesian enforcement officer, identified as D. Gunawan Wibisono, hostage and demanded the release of the remaining four fishing boats and all 55 crew members.
"The Vietnamese (coast guard) even told us to use binoculars to spot our officer held on board their coast guard vessel to ensure he is okay," said a government source.
The source, who asked not to be named as he was not authorised to speak to the press, was referring to Gunawan, who was manning the boat that sunk.
The Indonesians complied as they were outnumbered, and allowed the four fishing boats and their crew to go free but held on to 11 other Vietnamese fishermen, according to the source.
Mr Rifky, however, tried to play down the element of hostage-taking, saying that although Gunawan is currently being held in Vietnam, he will be released and return to Indonesia soon.
"Our officer was on the sinking fishing boat and that is why he was picked up by the (Vietnamese) coast guard, people were abandoning ship," he added.
Coordinating Minister for Maritime Affairs Luhut Pandjaitan called for calm when asked about the incident on Tuesday morning. "We will take a proportional action," he told reporters. "Now we're looking at what went wrong and where it happened."
The EEZ of a handful of littoral states in the South China Sea overlap with China's nine-dash line, feeding into the territorial disputes between the Asian powerhouse and Taiwan as well as Vietnam, the Philippines, Malaysia and Brunei in South-east Asia.
Indonesia was never a party to the dispute, but was recently dragged into a similar territorial fracas with China, after Beijing said in March last year during the Kway Fey incident that the waters in Indonesia's EEZ are part of its "traditional fishing grounds".