HANOI (REUTERS) - For those who like to push the cutting edge of style, two of the world's most talked-about haircuts are now available for free, in Vietnam.

In honour of an upcoming summit between US President Donald Trump and North Korean leader Kim Jong Un on Feb 27-28, a Hanoi barber is offering free haircuts to anyone wanting to copy their distinctive locks.

"I feel happy with this haircut because people will think I look like the leader of North Korea," said nine-year-old To Gia Huy, whose hair had been moulded to perfectly match the slicked-back top and shaved sides of Kim's unique coiffure.

Tuan Duong Beauty Academy is running the promotion to Feb 28 as thousands of officials and journalists descend on the Vietnamese capital for the second summit between Trump and Kim since their historic first meeting in Singapore last June.

"I was doing this for fun only but was surprised at how people have responded," said Le Tuan Duong, who owns the salon.

"I love peace. I hate war so much. So many people in my family have died, so I support this summit very much," said Duong, who lost two of his uncles during the Vietnam War.

Le Phuc Hai, 66, said he was relaxing by a nearby lake when Duong asked if he would like to get his hair cut, and dyed, like Trump's.

Hai agreed, out of curiosity. 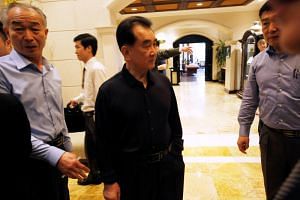 "I'm not afraid of this bright orange hair colour because after this promotional campaign, the hair salon owner said he would return my hair to normal," Hai said.

"I like Donald Trump's haircut. It looks great and it fits my age," said Hai.

Although warmly welcomed by some, publicity stunts at the expense of the North Korean leadership have the potential to get hairy.

North Korea is very sensitive about anything that could be construed as an insult to the dignity of its "supreme leadership", a phrase it uses to refer to the ruling Kim family.

In 2014, officials from the North Korean embassy in London complained to a barber who had used the phrase "Bad Hair Day?" under a photograph of the portly Kim to offer discounts on haircuts.

Huy, the nine-year-old Kim lookalike, said he was happy with his haircut though none of his schoolmates would be able to pull off the look.