HANOI (AFP) - YouTube advertisers should stop posting on channels that feature "toxic" anti-state content, a Vietnamese official said on Tuesday (June 25) at a meeting with major brands including Yamaha and Grab.

The communist country has tightened its grip on online dissent as critics turn to social media to air grievances about the one-party state.

A controversial cyber-security law passed last year calls for global tech giants such as Google and Facebook to scrub "toxic" content from its sites and hand over user data if requested by the government.

A separate advertising decree bars companies from advertising on alleged anti-state sites, though the issue is not included in the cyber Bill.

On Tuesday, Vietnam's Ministry of Information and Communications (MOIC) chaired a meeting with top advertisers, requesting them to stop paying to post ads on YouTube channels featuring "bad or toxic" content.

"We have sent warning letters to 100 brands... that have commercials or banners on clips or channels that violate Vietnamese laws," Mr Nguyen Thanh Lam, head of the Broadcasting and Digital Information Department at MOIC. 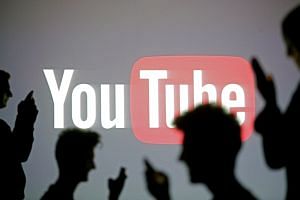 About 10 brands were at the meeting, including Yamaha, Grab ride-hailing app, Vietnamese property developer FLC Group and retail giant Vincom.

Cautious not to fall foul of the law, some companies have already started complying.

"We are reviewing very carefully all the channels that we are operating to lower the risks in the future," said Mr Tran Tuan Anh from online retailer Shopee, which has stopped its YouTube ads for the time being.

Officials said there are some 55,000 YouTube video clips with "bad or poisonous" content, 8,000 of which have been removed by the streaming giant, according to Mr Lam from the information ministry.

But he complained that YouTube often removes isolated clips, instead of blocking the entire channels.

Google, which owns the streaming service, did not reply to AFP's request for comment.

With all independent media banned and protests of any kind prohibited, activists have largely migrated onto social media to express discontent or call for political reform.

Facebook is hugely popular in Vietnam - more than half of Vietnam's 95 million people use it - but YouTube is being increasingly used among activists inside and outside Vietnam.