HANOI (AFP) - Vietnam on Monday (Nov 12) became the seventh country to ratify a sprawling Pacific trade pact set to come into effect later this year, despite US President Donald Trump's pullout from a deal he decried as a "job killer".

Eleven countries revived a slimmed-down version of the Trans-Pacific Partnership (TPP) without Washington, though the new pact keeps the door open in case of a change of heart - or government - in the world's largest economy.

Australia last month became the sixth country to ratify the now-renamed Comprehensive and Progressive Agreement for Trans-Pacific Partnership (CPTPP), paving the way for the pact to come into force at the end of December with more than half of its members officially signed on.

Vietnam followed suit on Monday with a unanimous vote to approve the deal by lawmakers in the country's parliament.

The protectionist president called the deal a "death blow for American manufacturing" and singled out Vietnam for taking jobs he would rather see on his home turf. 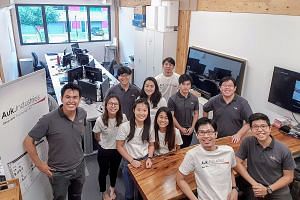 CPTPP: A not-so-little gift for free trade that may keep on giving

The trade pact was spearheaded by former US president Barack Obama who dubbed the comprehensive deal a "gold standard" for 21st century trade rules - and a crucial counter to China's rising global economic might.

The deal will bind members into a tougher legal framework for trade, lower tariffs and open markets.

It will also introduce new labour standards - a sticking point for communist Vietnam, where all labour unions are controlled by the one-party state.

The establishment of independent labour unions "may bring about some challenges", Giau said Monday, but added the government was open to making the necessary reforms.

Even without the US in the mix, CPTPP has been described as a game changer.

It covers many rapidly growing economies that account for around 14 per cent of world trade.

Members have said the US would be welcome to rejoin any time, and have even opened the doors for non-Pacific countries like Britain to come on board.