HANOI (VIET NAM NEWS/ASIA NEWS NETWORK) - Ride-hailing firm Uber's withdrawal from South-east Asia is expected to redraw the ride-hailing markets in countries including Vietnam, even as local authorities said Grab has not provided adequate evidence to prove that it has not formed a monopoly in Vietnam.

Grab, in a letter submitted to the Ministry of Industry and Trade on April 5, said that its combined market share with Uber in Vietnam is less than 30 per cent, so it does not have to "inform to the competition authority before proceeding and completing" the acquisition of rival Uber's operations in Vietnam, according to a report on Monday (April 9) on VnExpress.net.

However, the Ministry's Competition and Consumer Protection Department (CCPD) notified Grab of Vietnam's Competition Law, which states that a company that acquires a combined market share of between 30 per cent and 50 per cent without informing the competition authority will be fined 10 per cent of its preceding fiscal year's total revenue.

Do Thang Hai, deputy minister of industry and trade in a recent interview with VnExpress, had said there is a chance Grab will be punished after the authorities have fully considered the company's report on the Uber deal.

"Vietnamese drivers and consumers' interests will be guaranteed under the competition law," said Hai.

Many Uber drivers said the takeover was bad news since their incomes would be affected with the number of cars increasing sharply.

Some said that, in the past, with competition, they could ask Uber for higher commissions, but now they would have no choice and have to take whatever Grab offers.

Besides, many Uber drivers had borrowed from banks to buy a car or cars to become the company's full-time employee. With Uber's demise, they are likely to lose their jobs if they are not taken on board by Grab due to whatever reason.

Customers also fear that promotion programmes may be reduced or even stopped since Grab now appears to have a monopoly in the ride-hailing market.

An official from the Vietnam Standards and Consumers Association admitted that Grab is likely to start manipulating prices in a market in which it has no direct rivals.

However, many analysts dismissed such fears, saying Grab would not be in a position to abuse its apparent monopoly.

The scramble by local transport firms to enter the tech-based taxi market in recent times means they would provide enough competition to Grab, and dissuade it from harbouring notions of monopoly abuse.

Another, and more important, reason is that the governments of several countries which may be affected by Uber's withdrawal and Grab's monopoly, including Vietnam, have indicated they will not allow any possible anti-competitive behaviour by Grab. 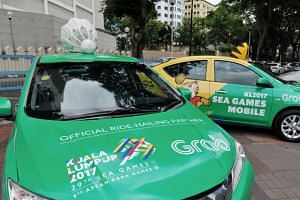 Grab's deal to acquire Uber has also drawn immediate and careful scrutiny from regulators in Malaysia, Singapore, and the Philippines.

Some analysts also pointed to another reason that would likely make Grab behave: It has been dominating the ride-hailing market thanks to its cheap fares and would be foolish to change that policy, especially since it still has to contend with traditional taxi firms, which remain as competitors.

Experts have noted Vietnamese transport firms' efforts to invest in technology to grab the opportunity to develop their business after Uber's withdrawal.

Local transport firms believe that the space created by Uber's withdrawal is a great opportunity for them to make inroads into the lucrative ride-hailing market so they want to grasp it by rushing to further invest in ride-hailing applications.

Phuong Trang Tourism Service and Transport JSC invested almost US$100 million (S$131 million) into Vivu and has renamed it Vato, reflecting its plans to develop a variety of e-commerce services.

This car application sets a minimum price of 25,000 dong (S$1.40) for a ride and then allows users to bargain with the driver for the most competitive price.

With 2,000 cars registered, the default price for customers is 8,500 dong per kilometre, similar to Grabcar. Drivers have to pay a 20 per cent commission, five percentage points less than Grab charges.

Mai Linh Group, another of Vietnam's leading taxi operators, has also seen the number of drivers registering to use its technology platform surge since the Grab-Uber merger.

Mai Linh Bike is setting itself apart from Grab by collecting only a 15 per cent commission and buying drivers uniforms if they earn 2.5 million dong in the first month of the contract. Mai Linh will also buy insurance for all drivers after six months of working.

The rate charged by Mai Linh Bike is 11,000 dong for the first two kilometres and 3,700 dong for every subsequent kilometre. Prices will not rise during peak hours unlike Grab and Uber.

Telecom behemoth Viettel recently signed an agreement with transportation start-up Gonow to become the latest entrant in the ride-hailing market.

Viettel will support Gonow in developing websites, a sales network, a customer care system and payment services. It holds a 30 per cent stake in Gonow.

Founded one year ago, Gonow is a platform which connects drivers or car owners with customers to provide passenger and goods transportation as well as car leasing services.

It operates in all 64 provinces and cities in the country and plans to expand to international markets starting at the end of this year.

In recent years, to cope with the rapid expansion of ride hailing apps Uber and Grab, several traditional taxi firms also developed their own car hailing applications under a Government-approved pilot project to use technology in passenger transport.

Other taxi companies like Taxi Group, The Ky Moi, Sao Thu Do and Vinasun also have their own ride hailing applications with interfaces similar to those of Uber and Grab.

Phuong Trang Tourism Service and Transport JSC said after Uber's pull-out from Vietnam was announced, the number of people using its Vato app increased to around 5,000 drivers for cars and bikes within three days, double the previous peak usage.

Ho Huy, chairman of Mai Linh Group, said the number of drivers registering to use the company's technology platform has increased. Hundreds of people use Mai Linh Bike every day, most of them shifting from Uber.