HANOI (AFP) - A fugitive spy was jailed for nine years in Vietnam on Monday (July 30) for "divulging state secrets" after he tried to flee to Europe holding a forged passport in a rare case involving a high-ranking intelligence officer.

The runaway spy Phan Van Anh Vu was arrested in Singapore in January with two passports - one fake, one real - and swiftly deported back to Vietnam where he was charged with espionage.

His lawyer said he was trying to reach Germany to offer information on a former Vietnamese oil executive who was kidnapped from Berlin last year and smuggled back to Vietnam to face corruption charges.

Vietnam has not elaborated on the state secrets Vu apparently disclosed, or to whom, but the Cold War-style case has gripped a nation unused to seeing the powerful toppled in public.

Vu, working as a high-rolling property developer and secret spy at the time of his arrest, was convicted after a one-day, closed-door trial in Hanoi on Monday that AFP was barred from attending.

Vu was jailed for nine years, while two former intelligence officials were also convicted for "deliberately divulging state secrets", according to the government's website.

Local press attending the ultra-secretive trial were only allowed to hear portions of the swiftly-delivered verdict, which offered few details of the trio's misdeeds. 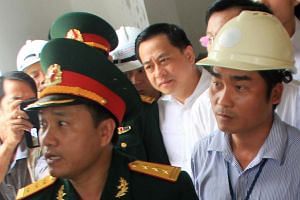 Vu's arrest shocked the public in a country where intelligence officials are often shielded from public disgrace - and legal punishment.

He was allegedly seeking to share information about another disgraced former official, Trinh Xuan Thanh, who was kidnapped by Vietnamese agents from a Berlin park last year, bundled into a van, and shipped back to Vietnam, according to the German government.

Hanoi says he came back on his own will to face trial, but the case has badly damaged diplomatic relations with Germany - last week a Vietnamese man was jailed for four years in Germany for taking part in the kidnap.

Thanh is now serving two life terms for corruption during his time as the head of a state-run construction company, a subsidiary of the country's largest oil firm.

Vietnam's conservative communist government in charge since 2016 has taken aim at bankers, businessmen and politicians that it accuses of mismanagement as it vows to stamp out corruption.

The unprecedented anti-graft campaign has seen scores jailed, many previously thought to be untouchable in one of Southeast Asia's most corrupt countries.

Observers agree the campaign, which has echoes of a similar drive in China, is seeking to clean up corruption - and also get rid of perceived enemies.