Despite sweeping reforms, communist-ruled Vietnam tolerates little dissent. The country's Constitution allows freedom of assembly, but protests are often broken up by police.

At least 31 people have been jailed for taking part in the nationwide demonstrations, triggered by fears that investors from China would dominate the 99-year land leases up for development in the zones.

In a trial which ended late on Monday, the People's Court of Bien Hoa City, in the south of the country, sentenced the protesters to between eight and 18 months in prison.

Five others were given 12 to 14 months' probation on charges of "causing public disorder", Voice of Vietnam Radio said.

They were arrested when taking to the streets on June 10 and"caused traffic jams", the report cited the indictment as saying. 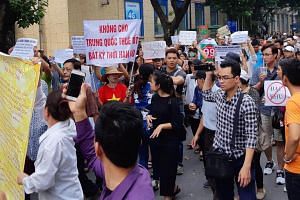 American to be deported from Vietnam over protest

Earlier this month, 16 people were jailed under identical charges in Binh Thuan province. June's protests had turned violent in the province, with protesters hurling bricks and petrol bombs at police.

Monday's trial came less than two weeks after a court in Ho Chi Minh City ordered the release and deportation of Mr William Anh Nguyen, 32, an American man of Vietnamese descent who was also arrested for "causing public disorder" during the protests.

"They have done nothing wrong," Mr Nguyen wrote on his Twitter account after Monday's sentencing. "The fight for justice and democracy continues."