HANOI (BLOOMBERG) - Vietnam said it will impose higher penalties on Chinese goods transferred to the country and illegally relabelled as made-in-Vietnam for export to the United States to dodge tariff hikes.

The customs department has detected dozens of fraudulent certificates of product origin and illegal transfers of goods ranging from agriculture and textile to steel and aluminium, the government said in a post on its website on Sunday (June 9).

Vietnam's exports to the US have surged this year at the same time that China's shipments to America slumped amid a trade war between the world's two largest economies.

While there's evidence of rising foreign investment into Vietnam as businesses adjust their supply chains, there are also worries Chinese products may be being rerouted via the South-east Asian nation to avoid higher US tariffs.

Mr Do Van Sinh, a standing member of the National Assembly's economic committee, said Vietnam is concerned it may be punished by the US for allowing fake made-in-Vietnam products to be exported to America, according to the government's post.

Fraudulent cases discovered by the government include packaging on Chinese goods being changed to say made-in-Vietnam before certificates of origin are processed. It cited an example of the US customs department uncovering Chinese plywood being shipped to America via a Vietnamese company.

Customs officials in Vietnam are beefing up their supervision and inspection of goods to crack down on the practice, the government said. 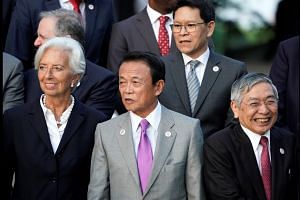 G-20 finance chiefs to warn of trade risks in communique

Vietnam is already under scrutiny from US authorities after the Treasury Department added the nation to a watchlist for currency manipulation last month. Vietnam has said its exchange rate won't be used to create an unfair trade advantage.

The authorities in the South-east Asian nation are concerned the US-China tensions will hurt economic growth. Deputy Prime Minister Pham Binh Minh told the National Assembly last week that gross domestic product could drop six trillion dong (S$350 million) in the next five years because of the trade war.