KUALA LUMPUR (THE STAR/ASIA NEWS NETWORK) - The use of mobile phones at petrol stations will cause a fire, right? Wrong, say experts. It's just an urban legend, circulated via e-mail as early as the late 1990s, claiming that the microwaves emitted from mobile phones could generate a spark that could ignite petrol fumes.

While in theory, microwaves can generate sparks when it comes into contact with metal, the waves emitted from phones are far too weak to create an explosion, says Universiti Putra Malaysia (UPM) electrical engineering professor Dr Chandima Gomes, who specialises in lightning protection.

"Microwaves from a mobile phone are at a very low intensity, something like 2.45GHz. In order to create that kind of spark, you need a very high-powered microwave. There is no scientific evidence to say that mobile phone emission is enough to create a spark," he said. 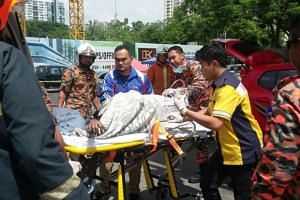 The belief was even put to test on the popular Discovery Channel programme MythBusters.

The hosts filled a gas chamber with fumes and then made a phone call inside it to see if it would ignite. The results were negative.

US-based Petroleum Equipment Institute (PEI) executive vice-president Robert Renkes said it was static electricity from a person's body that causes sparks when it comes into contact with the petrol pump, that creates fires.

After investigating hundreds of fire cases, Renkes said the "mobile phone" accidents usually occurred when a person was fuelling up and had returned to the interior of the car to make a call.

"When inside, their bodies rub against the seat, creating static electricity and charging the body.

"So they're sitting in the car, they generate static, they pop out again, they haven't dissipated their static, and they touch the pump nozzle.

Similar reports have also been issued by the US Federal Communications Commission, the Australian Mobile Telecommuni-cations Association, and the Oklahoma University Centre for Study of Wireless Electromagnetic Compatibility.

However, Dr Chandima contends that static electricity is unlikely to build in Malaysian petrol stations, given the high humidity that automatically absorbs excess charges in the body.

Commenting on Tuesday's incident where a woman suffered serious burns while refuelling her car in Setapak here, Dr Chandima said the victim might have been charging her phone or was using a deteriorating battery, hence sparking the fire.

"What happens is when a phone is really hot and you have petrol fumes, the sudden expansion of the fume from the heat may have caused the problem," he told The Star.

"Shell UK has published a study on radio frequency sparks from mobile phones, concluding that portable cell phones properly used do not represent a meaningful ha-zard on the retail forecourt.

"Without doubt, apart from the human acts of smoking and striking a match, the thing that represents the greatest hazard on the retail forecourt is the motorcar!"

Despite the scientific evidence, the rumour - fuelled by the advent of the Internet - caught on.

According to Kent University sociology professor Dr Adam Burgess, the stigma was also further enforced because of a global safety drive by the British oil industry, following a Scotland oil rig disaster in 1988.

However, the Malaysian Petrol Dealers Association president Datuk Hashim Othman said it was better to be "safe than sorry" with their safety campaign which includes posters warning against the use of mobile phones in stations.

"We also ask our workers to tell people not to use their phones. Sometimes we cannot force, we just advise.

"We have done studies with the Fire and Rescue Department and it has been proven that some handphones do trigger a magnetic field that isn't conducive when there are fumes. I don't know the details, but it can catch fire, especially during hot weather. It has happened before, especially with the old phones. I'm not sure about the new ones," Hashim said.

"The only thing is because the incident in Setapak seldom happens, people couldn't care less. Warnings to turn off the car engine and not use phones or smoke are already there.

"But unfortunately, the people need to have something happen before they believe," he said.