SINGAPORE (BLOOMBERG) - When signing a vision statement with the US last month, Thai Prime Minister Prayut Chan-o-cha quietly sat as Pentagon chief Mark Esper touted the commitment of an old ally at a time of "external coercion and intimidation" in Asia - a clear reference to China.

While neither statement committed Thailand to anything concrete, Prayut's balancing act showed the extent to which China has made inroads in a nation with deep US military connections going back decades.

Designated by former US President George W. Bush as a "major non-NATO ally" in 2003, Thailand served as a key staging ground during the Vietnam War when both countries teamed up to stop the spread of communism.

"Ultimately the reset in Thai-US relations means that Thailand finds itself at the center of a geo-strategic tug-of-war between the US and China in Southeast Asia," said Paul Chambers, director of research at the Institute of South East Asian Affairs in Chiang Mai, who has written extensively on security sector reform and democracy.

After Thai elections in March that rights groups said were neither free nor fair, US President Donald Trump's administration has moved quickly to make up lost ground.

US Secretary of State Michael Pompeo hailed Thailand for "returning to the democratic fold" during a visit to Bangkok in August, as his department pushes its "Buy American" weapons export strategy. 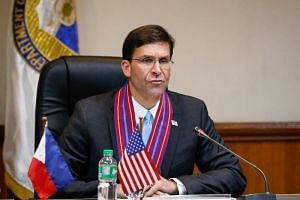 Regional defence ministers meet counterparts from China, Japan and US

China to build naval ship for Thailand, the largest yet for a foreign country

"Unlike the determination made in Beijing or Moscow, our major defense sales are managed by a process of policies that are clear and transparent and with approvals that are public," said Jillian Bonnardeaux, spokeswoman for the US Embassy in Bangkok.

She added that weapons and assistance programs from competitors "rarely deliver at advertised capability and instead leave the buyer in debt with systems that are not operational."

Thailand said in August it will receive 70 Stryker armored vehicles by year-end under the US Foreign Military Sales program, and that it plans to purchase 50 more.

The following month, the Thai army said it's buying eight AH-6i light attack reconnaissance helicopters in a US$138 million deal.

Competition between the US and China also has extended to military exercises in recent years. Thailand continues to host the US-backed "Cobra Gold" exercise, the largest military drill in Asia, which this year featured 29 participating countries including 4,500 US personnel and several dozen from China.

At the same time, Thailand has participated in more combined military exercises with China than any other South-east Asian country, according to Ian Storey, a senior fellow at the ISEAS-Yusof Ishak Institute.

What began as landmine clearance and humanitarian assistance drills back in 2005 have more recently expanded to air and maritime exercises, he wrote in May.

"It's about creating balance - we can't choose sides, we have to be friendly to everyone," Raksak Rojphimphun, the director general of policy and planning at the Thai Defense Ministry, said on the sidelines of a regional gathering of defense ministers in Bangkok last month.

"We're a small country. We can't choose our friends."

Still, the overall value of its trade pales in comparison to the US, whose exports averaged over US$9 billion annually during the last ten years. In 2018 alone, the US exported US$10.5 billion worth of weapons to foreign militaries.

For Thailand, where annual defense spending is budgeted at about US$7.7 billion, China may provide a cheaper alternative than the US for certain weapons.

Now the world's fifth largest arms supplier, China has largely sold to its neighbors, with Asia accounting for 75% of all sales, with Pakistan, Bangladesh and Myanmar among their biggest customers.

South-east Asia is a growing market for defense where countries have more money to spend and feel a need to react to their neighbors, said Siemon Wezeman, a senior researcher in SIPRI's arms and military expenditure program.

Reduced US engagement in Asia "helped push other players more toward China," Wezeman said. "The US just became a visibly less and less reliable partner."