The Geneva-based UN Human Rights Council established the inquiry in March, but Aung San Suu Kyi, the de facto leader of Myanmar's civilian government and also its foreign minister, has rejected the allegations and opposes the mission.

A Myanmar official said on June 30 that the country would refuse entry to the UN investigators.

The US ambassador to the UN in New York, Ms Nikki Haley, said: "It is important that the Burmese government allow this fact-finding mission to do its job.

"The international community cannot overlook what is happening in Burma - we must stand together and call on the government to fully cooperate with this fact-finding mission," she said in a statement. Myanmar was formerly known as Burma.

Some 75,000 Rohingya fled north-western Rakhine state to Bangladesh after Myanmar's army carried out a security operation in October last year in response to deadly attacks by Rohingya insurgents on border posts. 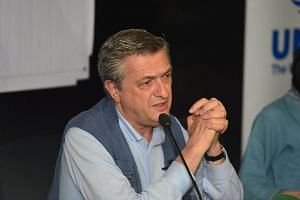 Rohingya refugees may stay in Bangladesh for some time: UNHCR chief

A UN report from February, based on interviews with some of the Rohingya refugees, said Myanmar's security forces have committed mass killings and gang rapes of Rohingya in a campaign that "very likely" amounts to crimes against humanity and possibly ethnic cleansing.

"No one should face discrimination or violence because of their ethnic background or religious beliefs," Ms Haley said.

Myanmar's government regards the approximately one million Rohingya as illegal migrants from neighbouring Bangladesh and denies them citizenship, even though Rohingya families have lived there for generations.