PETALING JAYA (THE STAR/ASIA NEWS NETWORK) - She was a bright young Malaysian pursuing a doctorate in clinical and counselling psychology because she wanted to help children the world over.

But she also had to persevere through months of what she described as racial bullying and insults, and when her university's psychology department seemingly did nothing, she could endure no more.

Ms Jerusha Sanjeevi, a child rape survivor of Chinese and Indian descent, took her own life in 2017 at the tender age of 24.

Now her family is suing Utah State University (USU) for alleged inaction over Ms Sanjeevi's multiple reports of relentless racist bullying, according to reports by US media.

The Herald Journal said that Ms Sanjeevi's family, who still lives in Malaysia, is seeking damages from the university. No amount was disclosed.

The lawsuit, filed by her boyfriend Matthew Brick, alleges that the university's psychology department did not do enough to intervene against the bullying that led to her death.

Ms Sanjeevi had a master's degree in clinical psychology and had enrolled as a doctoral student in USU's combined clinical and counselling psychology programme just eight months before her suicide.

In her research paper on child sexual abuse that was published posthumously, she was described as having a "life-long interest in improving lives of children globally".

It claims that the department "knowingly allowed one of its students to be verbally abused, intimidated and subjected to cultural and racist discrimination by favoured students over the course of eight months, when she was rendered so emotionally devastated and hopeless that she committed suicide".

The suit also alleges that the university, where 83 per cent of its students are white, had a pattern of favouritism as well as racism against international students facing a hostile environment, while faculty members had knowingly allowed such abuse to continue for years, according to the newspaper.

Ms Sanjeevi's bullying started just weeks after her first semester had started, and grew more intense throughout her time there.

"Every day I dread going to class now because I sit three feet from my white bully," she wrote to a close friend just a few months into her course, according to The Herald Journal.

Meanwhile, the Salt Lake Tribune reported that two students in her cohort singled her out and would not only discredit her and mock her whenever she spoke in class, but would also say she smelled like Indian food and talked about how dark skin was a sign of inferiority.

Reports said the bullying targeted her culture, including statements likes "Asians only want to please their parents", "Asian names are weird", and its people "stupid" and "second best".

A student told attorneys that the bullies would text Ms Sanjeevi pictures of Indian foods and memes, asking her whether they were "legitimate".

"This was done despite the fact that (Ms Sanjeevi) affirmed numerous times that she was not from India but from Malaysia," the student told the Salt Lake Tribune. 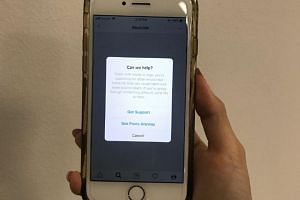 Not attention-seeking, suicidal expressions on social media could be a cry for help: SOS

She attempted to bridge the gap with her classmates by inviting them to a Deepavali celebration in October, but the harassment only grew worse.

Over the next few months, the comments escalated to insults like "slut" and "whore" as the alleged bullies passed her in the university's hallways.

However, the university was not in the dark about this.

She first reported her concerns in September 2016 to Prof Tehee who supervised a lab that both Ms Sanjeevi and the alleged bully was in.

Ms Sanjeevi later told her boyfriend that the professor and the alleged bully did not take her concerns seriously.

Her complaints ended up backfiring as the bullying escalated into rumours about her academic character.

When US President Donald Trump, who has a harsh stance on immigration, was elected in 2016, Ms Sanjeevi wrote to psychology professor Melanie Domenech expressing her concerns about getting deported and offered to help other international students in distress.

"As a Malaysian, I believe in food therapy, so I am going to be dropping off food this week for anyone who needs a pick-me-up, so let me know if I can help anyone in particular," Ms Sanjeevi wrote in the e-mail obtained by attorneys.

The lawsuit alleges that the bully then spread a rumour that Ms Sanjeevi was bipolar because she had been "so upset after the election but then made everyone food and was so happy".

In February 2017, Ms Sanjeevi sought help from USU's Counselling and Psychology Services centre, but its director David Bush "apparently assumed that some of (the bully's) rumours about Sanjeevi were true" in a report, the lawsuit alleges.

Upset by the report, Ms Sanjeevi wrote to Prof Domenech: "I gathered enough courage to report a white-skinned bully, but it has led to nothing but re-traumatisation from the school on every front. Him echoing the racism/victim blaming felt like the last beating before getting knocked out."

One of Ms Sanjeevi's friends also reached out to the university separately over how she was being dismissed.

Anderson & Karrenberg, the Salt Lake firm representing the plaintiff, reportedly said the university dismissed any reports as a "conflict between students" and declined to investigate the multiple reports of bullying and racism by specific students, even after Ms Sanjeevi committed suicide.

She had been growing increasingly despondent and withdrawn during the eight months, US news reports quoted the lawsuit as saying.

"I'm going to leave my lab because I can't take it anymore," Ms Sanjeevi told a friend before her death.

"She knew that I've been struggling with the fear of getting deported since the (US presidential) election. She knew that I have no power here as a foreign student.

"And she did this to me on top of all of that. I don't understand how a person can be so cruel," she added.

Just days before she killed herself, she told a friend that she was overwhelmed by the department's apparent apathy.

"I just don't understand why I matter so little to them," she said. "I haven't been feeling like living and this just confirms that I don't want this life anymore."

The law firm Anderson & Karrenberg told The Herald Journal that the university failed in its responsibility to Ms Sanjeevi.

"What we're alleging is that this particular programme had a duty not to turn away from a struggling student who was experiencing intercultural conflict," attorney Richard Kaplan was quoted as saying.

NOT ITS FIRST CONTROVERSY

In recent years, USU has been embroiled in lawsuits alleging a culture of discrimination, sexism and favouritism.

The Salt Lake Tribune reported in 2017 that the US Department of Justice had investigated how USU responded to reports of sexual assault.

This followed reports of a former student suing the university for allegedly mishandling sexual assault allegations.

The newspaper also reported that after Ms Sanjeevi's death, the department chair e-mailed students in the psychology programme asking them not to talk about the suicide publicly.

USU spokesman Amanda DeRito denied the allegations in a prepared statement to US media.

"Jerusha Sanjeevi's suicide was a tragic event that had a huge impact on the Psychology Department and on our entire university.

"She was a promising student, and her death tremendously affected her fellow students, as well as staff and faculty in the department.

"We cannot release private and protected student records or comment on the specifics of this case, but we strongly dispute the facts and allegations in the complaint. We believe Utah State took all appropriate action to address interpersonal issues between students in the department," she said.

'MY HEART WAS BROKEN'

In her suicide note, Ms Sanjeevi said the university made her feel like her life did not matter.

"I have lived with depression for over half my life, and somehow survived each episode. But each wave of sadness grew darker and longer," she wrote, according to news portal The Daily Beast.

"I looked and looked for a lifeline. Until I realised that I didn't deserve one. Because (the Department) succeeded at teaching me what poverty, violence, rape, and hunger somehow never did...

"When you dismissed the bullying report, you provided a final confirmation that I did, in fact, not matter.

"The innocence of blonde hair and blue eyes could deny, with toxic ease, the 'crazy' ramblings of this dirty brown skin.

"Watching the department not only choose to not enact consequences, but to give an award to the sick person who bullied me, was the last nail in my coffin.

"My heart was broken.

"Please be kinder in the future. Please send my ashes to my parents," were her final words.