WASHINGTON/KUALA LUMPUR (REUTERS) - The United States on Wednesday (Nov 23) said it was troubled by the arrest of a Malaysian activist and critic of Prime Minister Najib Razak under a security law.

Maria Chin Abdullah, the chair of pro-democracy group Bersih, was detained on Friday under Malaysia's Security Offences (Special Measures) Act, or Sosma, a law that was introduced in 2012 to fight security and extremist threats.

She was arrested a day before a demonstration that Bersih had organised for Saturday, when tens of thousands of Malaysians marched in the capital, Kuala Lumpur, demanding that Najib step down over his alleged involvement in a financial scandal . 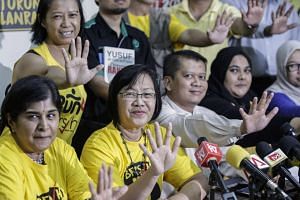 Maria Chin detained over documents found at her office, not because of Bersih 5 rally: Police chief 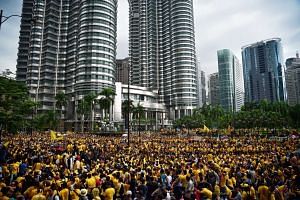 "We are troubled by the ongoing detention and solitary confinement of Maria Chin Abdullah under national security laws," Alicia Edwards, a spokeswoman for the US State Department, told Reuters in an emailed statement.

The US is also concerned about the Malaysian authorities' arrest of a number of other organisers, activists and politicians ahead of and during the demonstration, she said.

Nearly a dozen activists and opposition leaders were arrested a day before the rally but they have all been released except Maria. Several were also detained on the day of the rally.

"The United States remains committed to the strong and growing partnership we have with Malaysia. In the spirit of that partnership, US officials routinely and strongly voice our concerns about the rule of law, human rights, and fundamental freedoms with the government of Malaysia, and we will continue to do so," Edwards said.

Maria, who is 60 years old, is being held in solitary confinement in a cell 4.5m by 2.4m, where two light bulbs are turned on 24 hours, Bersih has said, adding that the cell does not have a window or a bed.

Under Sosma, she can be detained for 28 days without trial.

The Malaysian Human Rights Commission on Wednesday said the arrest under Sosma was unjustified.

Several other rights groups have said the use of Sosma for an organiser of a peaceful rally is abuse of power and that the Malaysian government is trying to suppress dissent by using draconian laws.

Najib has faced criticism since the Wall Street Journal reported last year that around US$700 million (S$1 billion) from state fund 1Malaysia Development Berhad (1MDB) was diverted into the personal bank account of the prime minister.

Lawsuits filed by the US Justice Department in July said over US$3.5 billion was stolen from 1MDB, which was founded by Najib, and that some of those funds flowed into the accounts of "Malaysian Official 1", whom US and Malaysian officials have identified as Najib.

Najib has consistently denied wrongdoing and has consolidated power by sacking critics within his ruling party and cracking down on dissenting opposition party leaders, activists and lawyers.