WASHINGTON (REUTERS) - The US State Department expressed concern on Tuesday (April 3) at the Malaysian parliament's approval of a Bill that would allow prison terms of up to six years for spreading "fake news" - an expression frequently used by US President Donald Trump.

Malaysian Prime Minister Najib Razak's government secured a simple majority in parliament on Monday to pass the Bill, which sets out fines of up to 500,000 ringgit (S$170,000) and a maximum six years in jail.

The United States is concerned about the Bill's "potential impact on freedom of expression in Malaysia, as well as its global reach, which could impact US citizens and companies," a State Department spokesman said in a statement.

The statement said the measure had moved "rapidly through Parliament without meaningful public consultation and debate," and urged the Malaysian government to consult with the business community and civil society before taking further action on the Bill.

In Malaysia, a Bill requires the assent of the country's figurehead sultan after passing parliament, but this is generally seen as a formality.

"We urge the Government of Malaysia to ensure that all its laws, existing and future, fully respect freedom of expression," the State Department spokesperson said.

Trump often uses the term fake news to condemn news reports or organisations whose findings he disputes or that are critical of him. The term has also quickly become part of the standard repertoire of leaders in authoritarian countries. 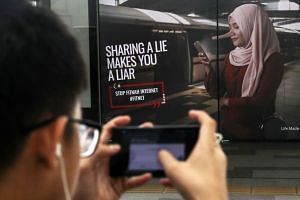 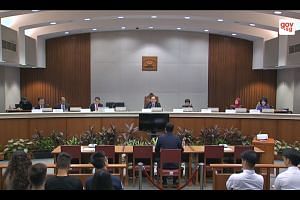 Action by Asian governments to crack down on fake news

Malaysia, where a general election could be imminent, is among the first countries to introduce such a law. Other South-east Asian countries, including Singapore and the Philippines, are considering how to tackle fake news.

On Tuesday, Indian Prime Minister Narendra Modi ordered the withdrawal of rules punishing journalists held responsible for distributing fake news, giving no reason for the change, less than 24 hours after the original announcement. The move followed an outcry by journalists and opposition politicians.

Malaysia's Bill defines fake news as "news, information, data and reports which is or are wholly or partly false," and includes features, visuals and audio recordings.

It covers digital publications and social media and will apply to offenders who maliciously spread fake news inside and outside Malaysia, including foreigners, if Malaysia or a Malaysian citizen were affected.

News reports and social media posts on a multi-billion-dollar scandal at state fund 1Malaysia Development Berhad (1MDB) have dogged Prime Minister Najib, who faces arguably his toughest contest in a general election that is due this year and could be called in days.

Najib has denied any wrongdoing in connection with losses at the fund.