KUALA LUMPUR - As much has RM600 million (S$203 million) belonging to troubled Malaysian state fund 1MDB could have been channelled to bank accounts of Umno, the country's largest political party, reported local media on Saturday (June 30).

According to the New Straits Times (NST), investigators in a renewed probe of the billions allegedly misappropriated from 1MDB, have frozen Umno's bank accounts as they seek to prove that RM600 million deposited into Umno's coffers came from the state fund.

The daily reported that the authorities were also seeking to establish and secure "what could be left of the funds".

Umno's acting president Ahmad Zahid Hamidi had announced on Thursday that the party's headquarters and Selangor branch accounts had been frozen by the Malaysian Anti-Corruption Commission (MACC).

It is believed that some 900 bank accounts belonging to individuals and organisations, including Umno and other parties, have been frozen as part of the 1MDB probe.

Meanwhile business weekly The Edge reported on Saturday that other parties in the Barisan Nasional coalition led by Umno received up to RM300 million from 1MDB for the 2013 general election. 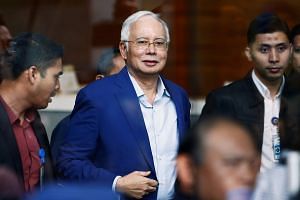 The account contained RM800 million, believed to have come from the proceeds of 1MDB bonds issued in 2012 and 2013. The sources said Datuk Seri Najib had a total of RM3.5 billion in all his accounts at AmBank, which were used for political funding and his personal expenses.

Sources told The Edge that in addition to the political parties, some 70 individuals, 60 companies and 10 foundations received a total of RM500 million from one account belonging to the former premier between 2011 and 2014. All of these payments are being investigated.