UNITED NATIONS (REUTERS) - Brunei is violating human rights by implementing Islamic laws that would allow death by stoning for adultery and homosexuality, the United Nations said on Wednesday (April 3).

Brunei, a Muslim-majority former British protectorate with a population of around 400,000, on Wednesday began implementing syariah laws, which punish sodomy, adultery and rape with the death penalty - including by stoning - and theft with amputation.

UN Secretary-General Antonio Guterres "believes that human rights are to be upheld in relation to every person everywhere without any kind of discrimination", said UN spokesman Stephane Dujarric.

"The legislation approved is in clear violation with the principles expressed," he said.

"So long as people face criminalisation, bias and violence based on their sexual orientation, gender identity or sex characteristics, we must redouble our efforts to end these violations.

"Everyone is entitled to live free and equal in dignity and rights."

Brunei has defended its right to implement the laws, elements of which were first adopted in 2014 and which have been rolled out in phases since then. 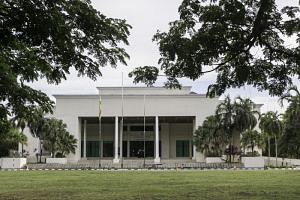 Brunei's Sultan Hassanal Bolkiah, 72, is the world's second-longest reigning monarch and prime minister of the oil-rich country. He ranks as one of the world's wealthiest people.

Oscar-winning actor George Clooney has called for a boycott of luxury hotels owned by The Brunei Investment Company, such as the Beverly Hills Hotel, the Dorchester in London and the Plaza Athenee in Paris.

The United States on Tuesday criticised Brunei's decision to implement the laws and urged it to ratify and implement the United Nations Convention Against Torture.