KUALA LUMPUR (THE STAR/ASIA NEWS NETWORK) - A "special order" bag from the House Of Bijan seized from residences linked to former Malaysian prime minister Najib Razak comes from "the most expensive store" in the world.

During the recent raids, linked to the ongoing 1Malaysia Development Berhad (1MDB) investigations, the police identified a "Bijan special order bag" as one of the luxury bags seized.

The House of Bijan is known as the most expensive store in the world.

Its diamond-encrusted bags, meanwhile, are likely to set buyers back by six figures or more.

The Bijan bag seized from the Najib-linked residence was among other seized goods of luxury brands such as Hermes, Chanel, Prada, Versace, Judith Leiber, Chopard, Rolex and Richard Mille.

As with all luxury brands, the House of Bijan has a "House" in its branding and a history to preserve its sanctity in the world of opulent retail.

The House of Bijan was founded in 1976 by the late Bijan Pakzad, an American Iranian menswear designer, who migrated to the US in 1973.

Pakzad's first boutique for the House of Bijan opened on Rodeo Drive, known as the most expensive retail address in Los Angeles and where luxury brands such as Bulgari, Gucci, Cartier, Dior, Jimmy Choo, Tiffany, Ralph Lauren, Vera Wang, Giorgio Armani, among others, are on display.

After Pakzad's death in 2011, The House of Bijan store on Rodeo Drive was sold for US$122 million (S$167 million) to the parent company of Louis Vuitton, LVMH Moet Hennessy Louis Vuitton in 2016.

There is no question of anyone just simply strolling through the sumptuous doors of its showroom with its blue awnings and bright yellow walls in Beverly Hills. 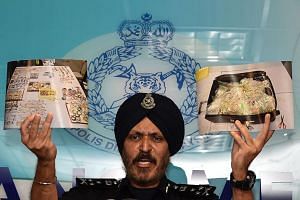 On its website, the House of Bijan is described as "a universe unto itself" and is legendary for its "by appointment only" showroom.

This "by appointment only" offering by the brand is the heart of its exclusivity and is what differentiates it from other luxury brands.

The brand's luxury offerings for the well-heeled are available in four categories: jewellery and accessories, driveable art, fragrances, and wearable art.

The House of Bijan has collaborated on design with Bugatti Veyron Motor cars and Rolls Royce Motorcars.

It was recognised with The Leadership Honor Roll by President George H.W. Bush, and it even has its own day - where The City of Beverly Hills has proclaimed May 8 as Bijan Day.

With a special order bag seized from Najib's properties, it is likely that he was also on this list.