KUALA LUMPUR (THE STAR/ASIA NEWS NETWORK) - Two Umno leaders were among four people who were charged on Thursday (March 28) with two counts of assaulting a 23-year-old Universiti Malaya student during a protest outside the university on March 22.

Lokman Noor Adam, a member of Umno's apex committee the supreme council, and Abdul Mutalif Abdul Rahim, head of Umno's Petaling Jaya division, were charged with causing voluntarily causing hurt to Wong Yan Ke by holding his jaw and pulling his neck from behind.

The four men were also accused of pulling the victim's hair from behind.

The offences were allegedly committed at a bus stop near the university during an altercation by some students protesting the presence of former premier Najib Razak at an event there.

The police said they received 12 reports following the incident.

At the time of the incident, Najib was speaking to a group of students at a restaurant located opposite the bus stop. 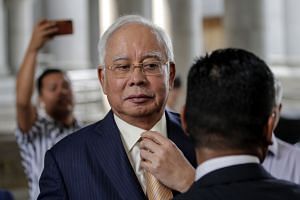 Lokman also faces a third charge of committing mischief with the intention to cause damage to Wong by ripping off the victim's placard that showed a cartoon cacicature of Najib.

Abdul Mutalif was also charged for allegedly using criminal force on the victim's right thumb, during the same protest.

The five accused pleaded not guilty to all the charges before magistrate Umzarul An-Nur Umar.