KUALA LUMPUR - Malaysia's annual northeast monsoon has claimed two lives in Pahang and forced nearly 12,000 people to be evacuated from their homes nationwide.

A teenager who fell into knee-deep floodwaters in Kuantan on Thursday (Jan 4) after he was believed to have suffered a seizure became the second victim to die in the floods in Pahang, reported national news agency Bernama.

Pahang police chief Rosli Ab Rahman said the body of Muhammad Al Asyraf Danial Mohd Al Asadi, 17, was found at about 1am. He said the victim was understood to have visited his friend's house and had decided to walk back to his home nearby.

"At that juncture, he was believed to have suffered a seizure, causing him to fall (into the water). However, no one knew of the incident until the villagers discovered his body," said Datuk Seri Rosli.

Muhammad Faris Aqeel Mohd Afif, 7, was the state's first flood casualty this year after his body was found in a ditch in Sungai Lembing on Wednesday. He was playing nearby and had fallen in.

Malaysia's disaster management agency said as at Thursday night, there were 11,991 flood victims sheltering at relief centres in Johor, Terengganu, Pahang and Sabah. It noted however that the severe weather warnings and alerts had ceased in all four states.

Pahang remained the worst-hit state with the number of flood evacuees at 9,366 as at noon Friday, from the districts of Kuantan, Rompin, Pekan, Jerantut, Lipis and Bera.

Twenty three schools in Pahang stayed closed on Friday from the floods, affecting 5,002 students and 490 teachers. 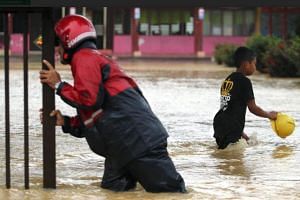 Meanwhile the situation in east coast state Terengganu took a turn for the worse on Friday morning (Jan 5), after a huge incoming high tide prevented surging river water from flowing into the sea.

Terengganu Civil Defence Force director Che Adam A Rahman told Bernama that even though the rains had stopped, the floodwaters could not recede because of the tide.

"This caused many low-lying areas in Chukai to be inundated early this morning and currently there are 2,159 flood evacuees from 541 families in two districts, Kemaman and Dungun, as at 8am compared to 1,364 people from 340 families last night.

"Two more evacuation centres were opened in Kemaman to accommodate the additional flood victims, making a total of 17 relief centres in operation in Terengganu," he said.

Overnight rain caused floods in Penang state - both the island and mainland - early Friday morning, The Star reported, with one temporary relief centre opened in Bukit Mertajam to house a family of five.

"The flooding is due to the continuous downpour as well as the fact that the drains in these places have not been able to accommodate the water flow," he said. He added that the Sungai Pinang river was at warning level.

The situation in Johor continued to improve, with only 262 evacuees staying at five relief centres in Mersing and Segamat as at Friday morning.