HANOI (REUTERS) - US President Donald Trump used a meeting with Vietnamese officials on Wednesday (Feb 27) to pitch arms exports from the United States, ahead of a meeting with North Korean leader Kim Jong Un.

Mr Trump is in Hanoi, the Vietnamese capital, for his second summit with Mr Kim since their first historic meeting in June last year.

Speaking after Boeing and General Electric signed agreements with Vietnamese airlines VietJet and Bamboo, Mr Trump said he appreciated the aviation deals and added that Vietnam had been looking to buy military equipment from the US.

"I also appreciate the fact that you're looking at much of our military equipment," Mr Trump said during a lunch meeting with Vietnamese Prime Minister Nguyen Xuan Phuc.

"We make the best military equipment in the world by far, whether it's jet fighters or missiles or rockets or anything you want to name, we make, we're acknowledged to have made, we make the best," said Mr Trump.

"So I appreciate you're looking at that very strongly and I know that's a decision you make".

Vietnam has been one of the world's most active arms importers in recent years, amid China's increasingly aggressive stance in the South China Sea, where the neighbours have long-standing rival claims.

Vietnam has been seeking to diversify its equipment and reliance on Soviet-era or Russian technology. 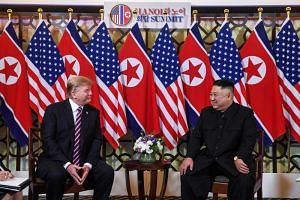 The US announced a complete end to its arms embargo on old war-time enemy Vietnam in May 2016 during a visit to Hanoi by former US president Barack Obama, which paved the way for Hanoi to be able to buy a full range of US weapons and military equipment.

Immediate big-ticket purchases are not expected, but Vietnam's military strategists have in the past indicated interest in US drones, radar, and possibly P-3 Orion surveillance aircraft.

The US gave six patrol boats to the Vietnamese coastguard in March last year, the latest move in increased security ties between them, following a landmark visit by a US aircraft carrier the same month.

The vessels were in addition to another six patrol boats and a high-endurance cutter provided to Vietnam by the US in 2017.