DENPASAR (Thomson Reuters Foundation) - Five years ago, tour guide Wayan Aksara noticed that more and more visitors he showed around the Indonesian island of Bali were complaining about garbage on its once-pristine beaches.

Bali's mounting rubbish problem was also becoming personal for Aksara, who lives near Saba beach - an undeveloped area close to the holiday resort of Sanur, which faces a constant battle with trash washed onto its shores from a nearby river.

"Every time we drove around, our guests ... would comment about it not being clean and the large amount of plastic," said Aksara.

"They would say the trash is bad, that tourism here is not sustainable, and ask what we are doing about it."

Aksara joined - and is now chairman of - Trash Hero Indonesia, a community group with more than 20 chapters across Indonesia and about 12 on Bali. It uses social media to organise weekly garbage-collection events for volunteers.

Aksara, a father-of-two, also gives talks at schools and community events on how to manage waste better.

Like many parts of Asia, the Indonesian archipelago of more than 17,000 islands has a fast-growing economy and population, and a huge coastline with many densely populated cities.

These factors have created a "perfect storm" for garbage in the surrounding seas, said Susan Ruffo, a managing director at the US-based non-profit group Ocean Conservancy.

Now, as awareness rises, civil society groups like Trash Hero are playing an important role in Bali's push to keep its famous beaches and temples free of rubbish.

"There is a plastic problem in Bali ... We need time but we (have) started already," Aksara told the Thomson Reuters Foundation. "Big things start from small things."

Globally, more than 8 million tonnes of plastics are dumped into the ocean each year, scientists say - about one truckload per minute.

Aside from the impacts on human health and wildlife, Asia-Pacific Economic Cooperation, a 21-nation forum, has put the cost to the region's tourism, fishing and shipping industries at about US$1.3 billion (S$1.77 billion) per year.

Stung by criticism, Indonesia's President Joko Widodo - who has targeted "10 new Balis" across the archipelago to boost tourism - has been quick to act.

In June, local media reported the government had teamed up with Muslim clerics to tell their more than 100 million followers to choose reusable bags over plastic ones. 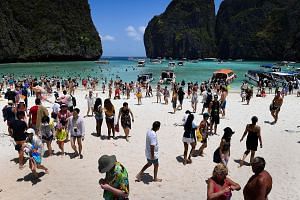 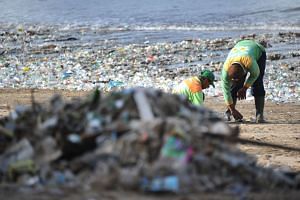 Jenna Jambeck, a University of Georgia professor who specialises in plastic waste and marine debris, said Indonesia had become a leader on the issue out of a desire "to protect their amazing resources and beautiful country".

Bali's most popular tourist beaches are now cleaned of trash at least once a day by local authorities using heavy machinery.

Mass clean-ups are organised at least three times a year on Bali and across Indonesia, bringing together tens of thousands of tourists and locals to tidy up communities.

Despite this, the rubbish problem on Bali was so bad late last year that officials declared a "garbage emergency".

"If you're finding plastic on the beach, it's already too late," said Ocean Conservancy's Ruffo. "It should never be there in the first place. How do you stop it at source? There is no one fix or silver bullet."

Tracing the origins of the trash on Bali's beaches is difficult, but experts estimate up to 80 per cent comes from the island itself.

Rubbish collected from hotels and villages by informal workers is often dumped in rivers and then carried out to sea before eventually finding its way back to the coastline.

A rise in the use of plastic packaging over the last decade, coupled with increased wealth and consumption, has exacerbated the problem, experts told the Thomson Reuters Foundation.

Businesses, meanwhile, should redesign products or change materials so they are easier to reuse or recycle, said Jambeck.

Governments also can make a difference by requiring a certain amount of recycled content in products, banning plastic bags or taxing single-use plastics, she added. Based in Bali's cultural centre of Ubud, local company Rumah Kompos has six trucks that collect waste from hotels and private homes. The trash is then separated at the company's depot to recycle, turn into compost or send to landfill.

The facility will host local children at weekend green camps, with a cinema showing films on climate change and plastic waste, he said.

The company has also begun piloting a free reusable water bottle scheme at schools in Ubud.

"My dream for the next five years is for every village on Bali to do (rubbish) separation," Asmorobangun said. "We must do it now, not tomorrow."

At Sanur Kaja village in Denpasar, garbage gatherers are reaping the financial rewards of joining a pilot project run by Gringgo Trash Tech, reflected in a row of brand new motorcycles parked near the local authority's waste collection facility.

Apps and GPS helped create a zoning system in the village of 5,000 residents, enabling garbage gatherers to become better-organised and more efficient. As a result, they can collect more rubbish from more households to increase their earnings.

"If these guys stop working, this city will be shut down in less than a week," said Gringgo co-founder Olivier Pouillon.

Besides improving coordination with the local authority, Gringgo's app provides the latest prices for recyclable waste.

The system now serves about 60-65 percent of the village, with three times as much rubbish collected, said Pouillon.

"The quickest way to stop the pollution is to track where the waste is going, and that's exactly what we've done," he said.