JAKARTA (THE JAKARTA POST/ASIA NEWS NETWORK)- At least 60 shipping containers carrying hazardous and toxic waste (B3) have been piling up at Batu Ampar port in Batam, Riau islands, for five months since it was discovered that an earlier shipment to Tanjung Priok Port in Jakarta, had contained waste from foreign countries.

All hazardous waste produced by industrial zones in Batam are supposed to be sent to a treatment plant operated by PT Prasadha Pamunah Limbah Industri (PPLI) in Cileungsi, Bogor, West Java, which is currently the only treatment facility for hazardous waste in the country.

The recent discovery of the illegal containers that were shipped together with the locally produced waste had prompted Batam Customs and Excise Office to suspend all waste shipments from the islands regency.

The head of the Batam Environment and Forestry Agency, Herman Rozie, said they decided to stop sending away the waste because authorities had found three containers of hazardous waste at the Jakarta port that were suspected to have originated from outside of Indonesia but had transited through Batam.

"After the discovery, we were worried that more waste from abroad would transit illegally through Batam and then be sent to Cileungsi to be eliminated. That's why we were asked to fix our waste management system, one way by implementing electronic manifests," Herman said.

By using an electronic manifest system called Festronik, Herman said they would know the volumes, origins and destinations of the B3 waste.

"We must be firm in managing the B3 waste and with Festronik everyone - the environment and forestry agency, customs and excise office and the companies producing the waste - can track the journey to the waste treatment plant," he told The Jakarta Post on Friday. 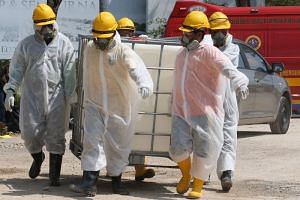 Herman said manual manifests were prone to being abused.

According to the agency, every three months about 18,000 tons of B3 waste was produced by more than 300 companies in Batam, which is one of the country's largest industrial clusters.

Illegal waste has been shipped through Batam seaports many times because of the busy traffic on the island, which is linked to Singapore.

In 2009, about 3,800 tons of copper sludge were found in Batam that a local importer had reported as something else in the manifest. The waste containers were unloaded from a Panama-flagged ship, but the origins of waste was never discovered. It was suspected that the containers came from Busan, South Korea.

Indonesian law forbids imports of any kinds of hazard and toxic waste. The government introduced electronic manifests for B3 shipment in 2017 to prevent the illegal imports, but the system has never been properly implemented.

Waste transporting companies in Batam have complained about the online manifest system that often went down, hampering them from registering their activities.

"What we want right now is a way to immediately ship the thousands of tons of B3 waste suspended at the harbour," said Arlon Veristo, an operational director of PT Green Global Sarana, one of 50 waste transporting companies operating in Batam.

Arlon said the company has received complaints from their clients because of the disruption in the waste treatment process.

The head of the Environment and Forestry Ministry's hazardous waste transportation division, Biyang Frederius, said the electronic manifest was intended to eradicate illegal waste shipping in the country.

"All waste will have clear identification known through the electronic manifest; we will know the source, the company and the destination, " he said.

The head of compliance and information services at the Batam customs office, Zulkifli Islami, said that based on the ministry's direction there are five requirements to ship B3 waste from Batam.

"The most important requirement is that the B3 waste must not come from outside Indonesia," Zulkifli said.

Indonesia has struggled with imported waste ever since China banned imports of 24 types of waste materials in February 2018.

Hazardous waste has never been allowed to enter the country, which still struggles to treat its own with limited facilities.