JOHOR BARU (THE STAR/ ASIA NEWS NETWORK) - Fraudsters and touts have been raking in huge profits preying on Malaysians rushing to work in Singapore by train during rush hour.

Prices of train tickets for the five-minute ride from Johor Baru to Woodlands, are going for as much as triple the normal amount as the train tickets were snapped up by syndicate members in bulk.

The usual fare from Johor Baru to Singapore is RM5 (S$1.60) and S$5 from Singapore to Johor.

There have also been cases of fraudsters printing "online tickets" as some KTMB trains, which are only supposed to ferry 320 passengers a trip, carried at least 25 per cent more. 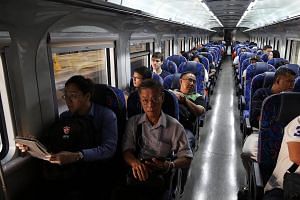 The syndicates do not just operate in Johor.

They also sell the "black tickets" in Woodlands.

A passenger known as Chin, 33, who takes the train to work daily said he was forced to pay up to RM10 for a ticket from the touts.

"Even if I get there early, I cannot get tickets for my ride," he claimed.

"For the return ticket, I am sometimes forced to pay up to S$10 (RM30)," he said, adding that the price fluctuated.

Mr Chin said the touts usually ope­rated between 5am and 8am as it was the rush hour.

He still preferred to take the train as it was "convenient and easier to travel to work instead of using the bus", with long waiting queues at the Immigration counters.

Another commuter who works in Singapore, Ms M. Latha, 36, said she stopped using the train as the situation of "no tickets" had worsened in recent weeks.

"I refuse to pay the touts and would rather take the bus," she said, urging KTMB to stop people from bulk buying especially online.

Lawyer Norman Fernandez, who travels regularly to Singapore to see his daughter, said he was aware of the touts at the KTMB counter in JB Sentral.

"KTMB should require people to produce their passports when buying tickets. Also, do not allow people to purchase in bulk.

"This problem has been there for some time and the authorities should do something about it.

"Not just train ticket touts but also taxi sapu, which operate blatantly in the open at the Johor Customs, Immigration and Quarantine complex," he added.

"We will temporarily stop all online booking beginning Dec 1," he said.

"People are also only allowed to purchase their tickets 24 hours in advance at the ticketing counters," he said, adding that passengers could no longer purchase tickets for long periods.

Omar said KTMB was concerned about passenger safety after they discovered overloaded trains due to the issuance of fake tickets.

"We have also carried out operations against the touts and nabbed some of them but the problem keeps coming back," he said.

Presently there are 24 trips to and from Singapore daily via the Tebrau Shuttle.