MANILA (AFP) - The Philippines' top court heard arguments on Tuesday (June 19) for the legalisation of gay marriage, a historic first in the overwhelmingly Catholic nation.

Two same-sex couples denied licences to wed urged the Supreme Court to strike down a 1987 law that states marriage must be between a man and a woman.

"When the right to marry, a decision so personal, so intimate and so life-changing, is denied to LGBT people, the state is not valuing their dignity," lawyer Jesus Falcis, who is also a co-plaintiff, told justices in Manila.

It took three years for the Supreme Court to schedule a hearing and the case will likely move at a glacial pace.

Judges will next hear from the government's lawyers, but the court does not set itself deadlines to issue rulings and cases sometimes take years to resolve.

"The decision will be landmark because the court has never pronounced on this," University of the Philippines law professor Antonio La Vina told AFP. 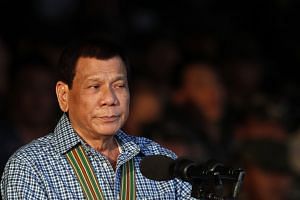 "Obviously, it would be even more landmark, more historic if they say marriage is not between a man and a woman." Outside the court on Tuesday, about 20 members of Manila's LGBT community waved rainbow flags and lit multi-coloured candles in support of the petition.

Danton Remoto, founder of the LBGT political party Ang Ladlad (Out of the Closet) told AFP he welcomed the Supreme Court's hearing of the case.

"A space has been opened up to discuss this case legally," Remoto added.

The Philippines - where 80 per cent of a population of over 100 million is Catholic - is the only place outside of the Vatican where divorce is outlawed.

Abortion is also illegal, largely due to church influence.

However the plaintiffs may have an ally in President Rodrigo Duterte, who has expressed support for gay marriage but since backed off from a campaign trail pledge to legalise it.

"I am for same-sex marriage. The problem is, we'll have to change the law. But we can change the law," Duterte told a gathering of LGBT people in his southern home city of Davao in December last year.

The case comes as Duterte pushes back against the country's clergy, who are at odds with some of his key policies including a deadly drug war that has killed thousands.

In May, Duterte allies in the House of Representatives passed landmark divorce legislation, though it is unlikely to become law due to lack of support in the Senate.

Church leaders have fought efforts to legalise divorce, same-sex marriage and abortion, while losing a long battle against a state-funded free contraceptives law.