KUALA LUMPUR (THE STAR/ASIA NEWS NETWORK, AGENCE FRANCE-PRESSE) - Malaysia is all ready to help Indonesia put out its raging fires in Kalimantan and Sumatra in order to ease the severe haze in the region, said Energy, Science, Technology, Environment, and Climate Change Minister Yeo Bee Yin.

Smog regularly blankets parts of South-east Asia during the dry season when burning is used to clear Indonesian land for palm oil, paper plantations and other crops, sparking ire from regional neighbours.

In the latest outbreak, parts of Malaysia's eastern state of Sarawak on Borneo island have been blanketed over the past few days.

"The urgency now is for Indonesia to extinguish the fires and the government is ready to offer any kinds of assistance to help Indonesia in both Kalimantan and Sumatra," she said in a Facebook post on Monday (Sept 9), adding that Malaysia will exhaust all diplomatic channels to get Indonesia to act.

"We will be sending diplomatic notes to Indonesia to underscore the seriousness of haze, as well as to emphasise the urgency in putting out the fires," Ms Yeo said.

She said her ministry is working with the Foreign Ministry on the matter following a scheduled meeting between the Malaysian ambassador and his counterpart on Monday.

Responding to a query from The Straits Times yesterday,  Dr Agus Wibowo, acting spokesman for Indonesia’s national disaster mitigation agency (BNPB), said Indonesia did not need foreign assistance yet to deal with the matter and that it was capable of handling it.

Malaysia on Monday said it was preparing to carry out cloud seeding to induce rain in hard-hit areas with sufficient clouds.

National news agency Bernama reported that the earliest possible date for cloud seeding in Sarawak is on Thursday, with Deputy Chief Minister Douglas Uggah Embas quoted as saying it mainly depends on the weather.

"Looking at the wind direction and the forecast, Thursday is the earliest. It depends whether clouds cover the affected areas," he said.

MetMalaysia director-general Jailan Simon said the haze situation in Sarawak has been easing, except in Kuching, Sri Aman and Samarahan.

He said the improvement in the central and northern regions of Sarawak was due to early morning showers, which also helped reduce the number of hotspots in southern Kalimantan.

"The haze in the western part of Sarawak is expected to continue as long as the fires in Kalimantan are ongoing," he said. 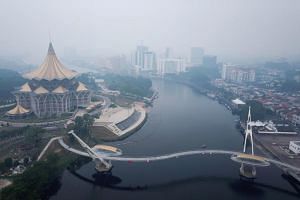 He also said moderate haze is expected to continue, particularly in the central west coast following the increase of hotspots in central Sumatra and the westerly monsoon blowing from that direction.

The national disaster management agency (Nadma) said on Tuesday it had sent 500,000 face masks to the state amid the air pollution, Bernama reported.

As of Tuesday, some 409 schools - comprising 347 primary and 62 secondary schools - have been ordered to close  due to the haze.

A total of 157,479 students are affected by the closure

However, the Ujian Pencapaian Sekolah Rendah (UPSR) examination proceeded in Sarawak as scheduled.

Previously, the state education department had issued a directive that schools in areas with air pollutant index (API) levels above 200 should be closed immediately. It also said public examinations would be postponed if the API exceeded 300.

Bernama also reported that all mosques across the country have been called to hold solat istisqa (prayers for rain) to ease the haze.

Jakarta has deployed thousands of extra personnel since last month to prevent a repeat of the 2015 fires, which choked the region in haze for weeks and set off a diplomatic spat.

Indonesia’s national disaster agency said last Friday the number of hotspots with medium-to-high potential to break out in blazes soared nearly sevenfold to 6,312 over a four-day period this month.